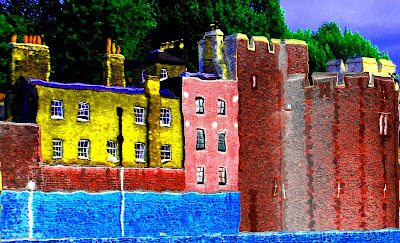 I do have to say that the side-by-side black-and-white mugshots are haunting.

As a notorious non-joiner, I refuse to join the group. And, besides, if the outrageous claim upon which this organization is predicated were actually true, then we could simply extend the logical determination that George Clooney, therefore, looks like Gertrude Stein and could reasonably be cast as lead in the cinematic adaptation of either "The Gertrude Stein Story," or the remake of the French absurdist, "The Guy Who Looked Like Gertrude Stein and Got Tasered in Front of a Urinal at a Writer's Conference."

So, yesterday, I got an email from my editor, asking me if I knew about the Kentucky Bluegrass Award listing. And, well, to be honest... I think she said something about that to me when I was in New York last time, but, with me, if it's not written down I rarely have any grasp of what I'm being told.

And, yes, it is also true that In the Path of Falling Objects is on the award's Master List for the 2011 Kentucky Book Award in the high school division.

This is quite an honor for me and my book, and it's a cool award because it's something that's voted on by the kids in Kentucky. And there are only 10 books on the list. And In the Path of Falling Objects is a really good book, but I say that in the most self-effacing, non-stuck-up way imaginable.

And, if the book actually wins the top award next year, I have heard from George Clooney's people that he will accept it on my behalf, which is fine with me because George Clooney has no idea what it's like getting tasered in a urinal for wearing a crayoned-in credentials badge.
Posted by Andrew Smith at 4:00 AM