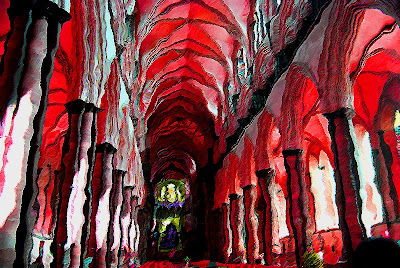 When I ran the series of guest blogs on the topic of Sex in YA Fiction, I wanted to be sure and get the viewpoint of a librarian.

I met Lucia Lemieux last fall at a book signing for Ghost Medicine. Since then, I have been invited out to her school, Newbury Park High School, a couple of times. Lucia is a writer as well as a librarian, so it made sense to me to ask her to chime in on the subject. Here is what Lucia had to say (in two parts, concluding tomorrow), on the subject of Sex in YA:

I read The Exorcist when I was thirteen years old. It horrified me.

No one prevented me from reading it; in fact, I remember that I bought it myself, at the local drug store on Mound Road in the Michigan suburb where I grew up. The drug store was a short walk from my home — much closer than the public library, where perhaps, the branch librarian, Mrs. H. might have gently reminded me that this book was intended for an adult audience, and may contain some concepts for which I might not be ready. In fact, I’m sure she would have. I had been a frequent visitor to the library since I was two years old. She knew me quite well, and knew what I could handle, even though I had a permission slip on file saying that I could read adult-level books. Yes, in those days in that community, any child under sixteen had to have parental permission to check out adult-level books—even academic ones.

No one at the drugstore said anything at all—they just took my dollar-seventy-five and sent me on my merry way. Even before I opened its pages, I knew from friends that The Exorcist was about a girl named Regan, twelve years old, who became possessed by the devil and began acting in strange and scary ways. When I didn’t know what that the book contains a lot of explicit and graphic description describing some of the rituals and behaviors of those who worshipped Satan—which I will only describe here as the “desecration” of statues of Jesus, Mary and various saints—as well as a very brutal “rape” scene. It grossed me out, and gave me nightmares for weeks.

Of course, the impression a book leaves depends upon the age of the reader. I read many books these days, and, for many reasons (sheer volume, memory overload or flat writing), I don’t always remember their plots, or even their authors. There are some books I personally would not choose to read if I weren’t working in a library, but sometimes I am pleasantly surprised. Yet, for me, the best books are those that leave some of the more graphic details out, and allow me to use my own imagination. There are exceptions, of course, but the art of nuance is a skill I wish more writers would practice. Perhaps it’s as simple as this: the more explicit the content, the less I remember it. I’m guessing this is because my brain doesn’t have to work as hard when every detail is spelled out for me.

However, I find that the books I read as a child or a young adult are still with me. Many have created lasting impressions. The Exorcist was one of those because it scared the innocence right out of me. It made me realize that evil—in whatever form it may take—exists. I can honestly say that the book crushed some of my then-Pollyanna views of the world. I’m sure that would have happened eventually, but perhaps I could have lived a little longer with that optimism. One’s emotional virginity, once taken, cannot be restored.

Despite that experience, I still believe in intellectual freedom (the right to seek and obtain information without restriction), which the American Library Association, that stalwart and essential library leadership group, hails. And, as a writer myself, I do not believe in censorship. I do believe, however, in common sense.

When I write, I continually ponder the details: what to leave in, what to take out. It really boils down to the story one is telling, and if certain details are absolutely imperative to revealing character. There are many ways around character, and sometimes not all of the graphic descriptions are essential. In some ways, I feel authors and filmmakers, too, don’t trust their audience enough. When I studied screenwriting, we learned not to use dialogue that was “on the nose” (obvious), or put in expository or gratuitous scenes. My feeling is that, often times, the same may hold true for sex scenes in books. We the readers—duh—get it.

(continued tomorrow)
Posted by Andrew Smith at 3:26 AM