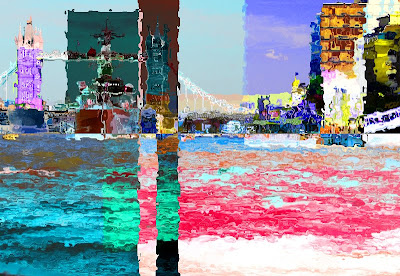 Sometime in the next week or so, I'll be wrapping up work on my fifth novel, The Marbury Lens. It's a strange book, and the process was a difficult one on many levels.

Maybe I over-think things, but in considering the genre of YA (Young Adult) fiction, I've spent a lot of time asking myself the unanswerable question -- What makes YA "Young" and "Adult?"

Forgive me if I get too psychological here, but I think fiction aimed at children is kind of obvious (whether or not we're talking picture books here) because kids have only four basic motivators as characters. Kids (characters and real ones) do things for only four reasons:

1. To get attention (positive or negative).

2. To escape an undesirable environment (like eating vegetables, or sitting quietly in their bitchy teacher's classroom).

3. To gain a tangible reward.

4. For sensory pleasure (this is why boys often tap their fingers or shake their knees).

And that's it. Period.

But adults have another motivator: sex.

So, sorry to break this to you, but if you're going to talk about YA, you're going to have to deal with the subject of sex. Sex is a powerful motivator for teens, and it shapes a great deal of their behaviors. Worst of all, it's always there, hovering in the background.

Or else we're not talking about Adults, young or otherwise.

So, that's Jack's Big Question. It's about sex and YA Literature. Jack and I asked some incredible people involved in YA fiction, and they've offered some opinions and advice on the subject. So, this week, we'll be posting guest blogs dealing with Sex in YA from authors including Brian James, Kelly Milner Halls, Michael Grant, and Bill Konigsberg (as well as a few "surprises"). We've also invited along Andrea Vuleta, from Mrs. Nelson's Toy and Book Shop (an indie bookseller that rocks); Nora Rawn, an editor with Random House; and a very talented young writer, teen blogger Adam DeCamp.

Please feel free to join in the discussion and post comments. We'll also include links to our guests' own websites/blogs and other information about their work when they come up. By Friday, Drew will hopefully have worked out his own ethical crisis, so he can be more specific about how this idea came to him.

Tomorrow: Brian James and Andrea Vuleta offer their takes on my big ethical dilemma.
Posted by Andrew Smith at 7:12 AM