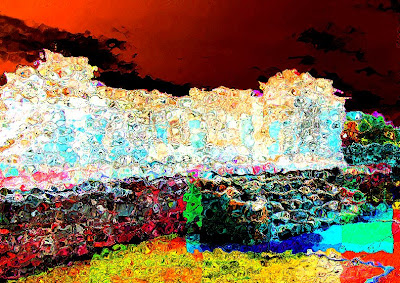 It's nice to know I'm not alone in my postpartum afflictions. No, on second thought, it's not that nice to know, but... oh well.

Of course, my good friend Lewis Buzbee keeps coming back to my favorite author: William Faulkner and his notorious postpartum drinking binges. Faulkner, I would assume, being a man's man, probably didn't sip Amaretto straight, nor scour the trendy bars of Mississippi hunting down illegal purveyors of absinthe (which I have yet to try but have already determined I will never sip anything strained through a sugar cube). And Faulkner liked moonshine, at least as far as I can tell, a drink that I've only had a couple of times in my life, and certainly not one I could ever imagine binging on.

But I'd like to try a good old-fashioned Faulkner binge to celebrate (if that's the word) wrapping up my latest novel.

Actually, I really think my family should do the binge thing. I am such an ass when I'm writing. Really. I confess. It's amazing I haven't been murdered in my sleep.

If my characters are angry, I'm angry. If they're OCD, I'm more OCD than usual (hard to freakin' imagine), if they cuss, I cuss like a sailor (did I actually let fly an F-bomb last night?).

Moonshine, anyone?
Posted by Andrew Smith at 7:25 AM