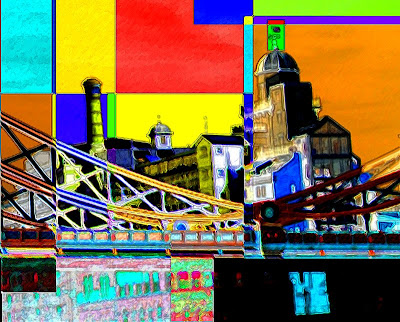 I've finally put more information about this summer's annual ALA conference in Chicago on the Ghost Medicine and in the path of falling objects websites.

But, here's the lowdown: First, most importantly, I will be attending the party of parties, the ALA Bloggers' Party on Saturday night. Last year, I met and chatted with some incredible author people who later told me that they instantly forgot who I was at that one. This is good, and confirms my "King of Anonymity" crown. Do not try taking that off my nondescript, indistinguishable head.

This year, though, Drew is going in my place. He's a lot more comfortable wearing name badges, and I've promised to give him mine. I never wear them, anyway. They clash with the crown, and who, honestly, doesn't like getting arrested for being an unauthorized attendee at these functions?

I live for that shit.

That, and letting Drew do mobile uploads of cell phone photos of urinals to my Facebook page.

On Sunday, I am actually going to be an author-presenter at the Y.A. Authors' Coffee Klatch, at which, a very hungover Drew will be in attendance from 8:30 - 10:00 AM (Location TBA). This is really one of the coolest things at the annual event, at least, to me it is. But I am already preparing a list of remarks for Drew to make when he shows up and the organizers ask the inevitably-always-asked question: So, who the fuck are you?

Later that day, I will be doing an in-booth book signing at 1:00 PM at the Feiwel and Friends booth, 1813, McCormack Place West. That may be your last chance of the weekend to have your memory erased, as well as to pick up an ARC of in the path of falling objects.

Cool stuff on the blog coming up: Oooohhhh... guest bloggers. Probably people you have actually heard of. We'll be talking about a very hot topic that I've been dying to spout off about, but will wait until my invitees have a chance to give their takes.
Posted by Andrew Smith at 6:32 AM