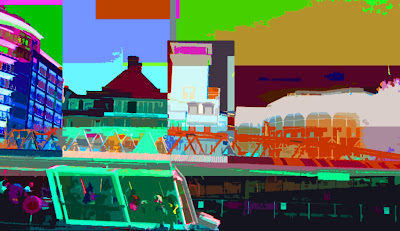 This week, we have some very impressive guest bloggers from all facets of teen reading and writing, who are offering their takes on the subject of "Sex in YA Literature." Please feel free to join in the discussion and post a comment or two.

Brian James is the author of more than 20 books for kids and young adults. His latest, The Heights, was just released last month. He maintains a blog called Saving the World One Story at a Time, which among other things, has some terrific music reviews introducing some very talented and underrepresented artists. Here's how Brian answered our question:

The topic of sex and sexual identity and how it should or shouldn’t be portrayed is one that often comes up in any discussion concerning YA fiction. Sex is an unavoidable subject when it comes to the genre, much like it is in the actual life of teens. In the debate, there tends to be two camps; those who think sex has no place in books for impressionable teens and those who think representations of sex in teen fiction are simply a matter of dealing with reality.

This isn’t an unfamiliar argument. We hear these same sides echoed in the political landscape regarding condom use, Sex Ed, teen pregnancy, and pretty much anything dealing with teenagers and sex. There are those who want to ignore what goes on and those who think there’s nothing wrong with what goes on. Somewhere along the way, I think common sense gets lost as both sides dig in their heels.

Personally, I think ignoring sex as a topic when telling the story of teenage character is kind of irresponsible. However, I also think there are YA books that go way over the top and glorify promiscuity without examining the consequences. In my opinion, it’s not a question of whether or not sex and/or sexual identity belong in YA lit or not. I think it obviously has a place. Sexual identity is a major part of being a teenager. Any realistic portrayal of a teen character is going to have some moments where he or she thinks about sex. The question for the writer then is how to handle the subject.

I don’t believe that YA authors have any obligation to give moral lessons to their audience. There are those who do think that should be our job…I’m not one of them. I think our obligation is provide some insight on a time in our lives that we are removed from. There’s an opportunity to pass along some (hopefully) acquired wisdom without creating a judgmental narrative about right and wrong.

When it comes to sex, I think a lot of adults become too far removed from what it was like to be an early teen (keeping in mind most readers of YA fiction are 12-15 years old). We remember the positives, along with the awkward moments, and these are the attitudes that are projected back in books.

But I think most adults forget that often times sex could be a scary thing at that age. It’s an unknown. Add to that the fact that there’s all of this pressure put on you to do it. The pressure comes not only from friends, but also from television and from marketing campaigns that continue to sell the idea of sex to younger and younger audiences. In this realm, you can also add an increasing number of teen books that feed this pressure to kids that if they’re not sexually active then they’re abnormal in some way.

I’ve always found that attitude to be slightly nauseating, and in many ways, the way I’ve chosen to deal with sex in my novels is from the other point of view. I’m very conscious of the fact the a good chunk of my readers are 12 year old girls and I do consider what kind of message a story gives them. That said, I don’t believe in censoring real life. But there are lots of aspects and points of view to every topic, especially sex. So I chose to present a side that I think is under represented (and happens to be the way I felt at that age, so it makes it easy). In a way, I suppose I hope to provide a balance or at least a comforting portrayal to that kid who feels they’re odd for not fitting the sort of Gossip Girl attitude toward sex.

Often I am asked the question, “Is this appropriate for my kid to read?” I always have to dig a little, just to discover what my customer might consider to be “appropriate”. My staff and I read most of the new titles we sell. And there are indeed books out there with some level of sexual content for teens. Why? Because teens do think about and (some) engage in (some) level of activity. Or at least they are aware of sex, and perhaps have friends that engage in some sexual activity. The thing that I tend to fall back on in recommending these types of books is that it is potentially safer to learn about the positive and negative qualities of being sexually active between the covers of a book, than to be potentially caught unaware. (The same can be said for many other activities, but that is a different blog.)

There are darn few positive real life examples of sexually active teens out there for kids to model their behavior. And they aren’t likely to be emulating adults at that point. Interestingly, some books that have minimal physical content are so super-charged with drama and passion, that I am concerned some kids will be in over their heads before they know it. If you are worried about sex in a book, consider this- is the portrayal realistic? Is it integral to the story or character development? What are the repercussions for the character? What are the behaviors or reactions of the supporting characters regarding the activity? Do you recognize that kid today, or from your own adolescence?

As a teen, I was often confronted with behaviors among my peers that I did not understand. I knew what sex was, I knew about teen pregnancy, I understood the mechanics. I did not understand the very real emotional costs involved. I might have been a better friend to my 8th grade pal that became pregnant, or possibly have seen that coming had I imagined or read about people in those situations. I am thankful that today’s authors are offering some examples of real life in fictional situations.

Books are safe zones to engage, ponder, and adapt all kinds of information. Kids that read about sex don’t necessarily engage in sexual activities more or sooner than kids that don’t. What if your kid isn’t ready to read about sexual relationships? Odds are they won’t be interested in books with sex, or they’ll self-edit, by skimming past those passages.