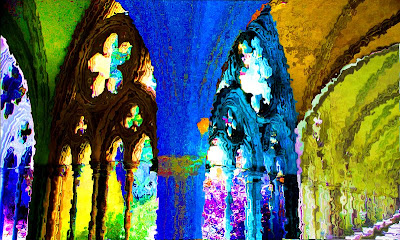 It's interesting, to me, the wide variety of reactions I've received from advance-copy readers of in the path of falling objects. One thing, they've all been very positive... but each reader, it seems, keys on entirely different elements in the story and its characters.

One male reader told me that he identified with Mitch (I know... for those who've read the book, this is a fairly frightening confession). The reason, he said, was that he was a habitual "counter," too. Mitch, the psycho, takes Obsessive Compulsive Disorder to an entirely religious level.

But I'll admit that just about every writer I know is a bit OCD... and some of us take it to an extreme level, too. That's why it was easy for me to come up with a deranged character like Mitch... all I had to do was wonder about how far you could let a disorder like this go. Sadly, too, when I was a kid, my best friend who I used to hang around with every day, had to live through his mom repeatedly being institutionalized for the disorder.

Anyway, one of the things that I do that is very author-OCD is make backup copies of my work.

I burn CDs and leave them in my car (in case my house burns down). I email entire manuscripts to myself at multiple addresses (in case my house burns down and somebody steals my car). Because one thing I do not ever want to have to do is rewrite an entire book from memory from page 1. So I go through this multiple-backup ritual every 5,000 words or so... which means that if my manuscript is, say, 100,000 words long, by the time I'm finished with it, there may be 70 or 80 copies of it in various stages of development all over the planet.

This is what happens.

I'm going to go through this crap again today.

Then, when I truly am finished... sometimes I have a hard time figuring out which copy is the "one."

Don't send me suggestions. I'm a sick, sick sonofabitch.
Posted by Andrew Smith at 6:25 AM