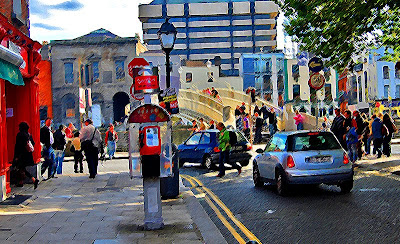 Yesterday, I had a terrific online back-and-forth with author Lia Keyes about series novels. One of the things that triggered the discussion was a comment Lia made about structure, and, in particular, the first book in a series.

Lia said that pulling off a suspenseful story and a satisfying ending for the first in a series is not an easy feat to pull off.

And this is exactly the problem that most series have. Why? Well, to me the answer is most likely that unsatisfying endings and awkward timing, story arc, and resolution of conflict are usually due to the fact that the author of the LAME-ASS series in question started off with this preconceived notion in the author's mind: Oh, I am going to write a series, and make a fabulous amount of money, just like that wizard and vampire chick did.

So, they start with the goal: series, as opposed to simply having a good, well-constructed story in their heads.

This is why I am generally anti-series, and it has to be REALLY GOOD to get me to first even consider picking up the initial installment, and, second, to pick up the next ones after that.

(Michael Grant, I am NOT baiting you... see concluding paragraphs)

The key, unavoidable, inescapable, is that the author has to develop a heroic protagonist -- warts and all -- one that the author obviously loves; and one who readers will fall in love with, too.

I will admit, openly, that I had in mind a sequel to The Marbury Lens when I wrote that novel. The funny thing is that I wrote about half of a "second installment" to that book, but then got entirely waylaid when the novel that I am currently writing just started coming out of my hands during October. And this is the one. So, no big deal. And I don't know if I will go back to that follow-up to Jack's story, and what really happens in Marbury or not, because I don't need to if I don't want to.

Because the book has a goddamned ending.

The hardest time I had with The Marbury Lens was that the protagonist, Jack, is so wounded and he is -- rightfully -- very angry. Anger is a turn-off to readers, so I had to make sure that they, and I, would be totally in Jack's camp for this rather lengthy book. I think I pulled it off, but, because of what happens to Jack, readers truly get to see his weaknesses, flaws, and ugly side. Deep down, he's a good guy, and a genuine friend.. but he's pretty messed-up by what happens to him.

Most importantly, series novels have to stand on their own. They have to have real endings that give the reader some sense of completion of each stage of the journey. I recently read a series opener that had the trifecta of crappiness:

Did I mention I didn't care about the hero?

An example of a good series that really has great characters -- warts and all -- is Michael Grant's Gone, Hunger, and I am looking forward to Lies. I really like the characters, and they all definitely have flaws, even the "good guys," and, most importantly, the books stand up on their own. They do not leave you hanging, but they do want you to stick around to see what happens next.

Lesson to authors: Tell the story first. Worry about spending the royalties later.
Posted by Andrew Smith at 3:17 AM