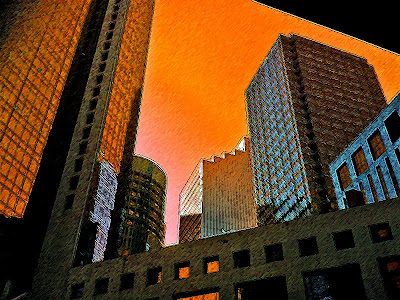 There are few things more turn-offy to me than when I stumble upon a book blog where the author is ranting (usually effusive crap about how much they love some new book about a fairy who falls in love with a vampire), and the author of the blog obviously can't distinguish between there and their, or then and than.

Um. Well, "inventive spelling" is all well and good, I suppose. It allows today's hyper-uptight and rigidly conservative (oh, they think they are so clever and classless and free... and that's another topic entirely) young folk to get in touch with their vampire-loving-fairy selves, but, yes, it does matter.

When teachers, mentors, adults, etc. make allowances for "inventive" uses of spelling and grammar... well, it's kind of frightening to imagine what we'd tolerate as "inventiveness" in other disciplines.

How about "inventive" cooking. Just because it's hot and comes from a pan, you should eat it, right? Or "inventive" gall-bladder surgery. Well, as long as we know what the surgeon or the chef were intending to mean.

When I was in San Francisco, a very bright young man asked a question to the panel of authors that kind of (no... effusively) contained some back-door jabs at us, and, I have to say that the authors who tried to address his question ahead of me seemed to have entirely missed his not-so-subtle agenda. He proposed, among other things, that

1) You shouldn't write books for Young Adults if you are old enough to have voted in the last election, and

2) The youth of today, with whom authors who are currently old enough to have voted in the last election are completely out of touch, are very progressive, open-minded, liberal, free-thinkers who refuse to be constrained by the rigid conventions of the older generation's expectations.

Of course, he didn't say it as brilliantly as I just did, but, then again, he doesn't realize who within that panel of five he was trying to fuck with, either.

So, I'm going to get to his assertion, the there and their, then and than debate, and other "target audience" issues coming up this week.

Old fuckers, take note.
Posted by Andrew Smith at 3:16 AM