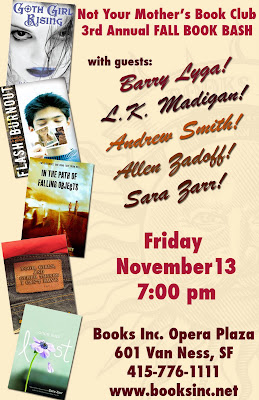 That's a lot of numbers. And I fully intend to get beyond the 365 post mark by December 31.

By the way, I have a particular fondness for the number 313. I'm kind of into numbers, but not in an especially creepy way like Mitch, the bad guy from in the path of falling objects.

In Italy, where I spent a lot of time growing up, the number 13 is a lucky number. In fact, my aunt Fernanda gave me a silver 13 charm on my 18th birthday, which I spent, obviously enough, in Italy.

Next Friday (Friday the 13th), I will be appearing at the Opera Plaza location of Books Inc. in San Francisco for their fall 2009 Not Your Mother's Book Club, at 7:00, along with all those incredibly notable authors listed on the poster at the top of this blog (number 313).

I'll also be flying on an airplane to San Francisco that morning. Which is better, I am convinced, than flying on anything else. Except, maybe, a pterodactyl. That would be cool. That would make me feel confident and capable.

And I'll be downing a fistful of tranks, too... but not because of the flight, nor because of the date, but because appearing with REAL authors always makes me nervous. It's a certainty that I will be immeasurably dorky in their presence.

I have lots of friends in San Francisco.

Or, maybe I'm deluding myself into thinking that and they actually are friends with other Andrew Smiths whom I happen to resemble, but are all fully capable of behaving with a certain ineffable and suave maturity when they are in the presence of REAL authors.
Posted by Andrew Smith at 3:24 AM