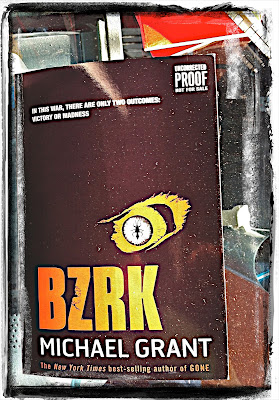 Maybe a week ago, I un-reviewed S.A. Bodeen's summer 2012 release The Raft.

So if you need to know what an un-review is, you can check that one out. Basically, I think that authors don't have any business reviewing other authors' works. Not unless they really want to get into a public pissing match -- which is always quite enjoyable -- or perhaps get into an overly-salivated public display of face-sucking -- which is always kind of gross.

Anyway, I am going to un-review Bodeen's novel again in August, which is when the book comes out.

But this one, BZRK, by Michael Grant, comes out on Tuesday.

You must get this book. That is all.

That's just not for me as a reader. As I said last time:

He appeared to enjoy himself tremendously!

That's probably why I wanted to un-review both of these books. I have read Michael's earlier books (and S.A. Bodeen's, too), and I think Mr. Grant has really poured something deeper and more darkly grotesque from his black, twisted soul directly onto the pages of BZRK.

Read this book with latex gloves on.

Here's what you know from the cover: There is a little bug thingy, and it is inside an eyeball of what looks like an insane person.

That is really all I need to say.

Now I will tell you a story about Michael Grant.

I believe we first met in 2008. I could be wrong. So much of the road behind me is distorted in the vibrations from the loose rear-view mirror attached to the windshield of my life.

It was at a writer's thing where there were lots of authors, librarians, booksellers, and bloggers.

That meant we were the only two men in the room.

[Anecdotal observation: In 2012, given the same environment, I think there would be four men in the room now.]

We have come a long way, baby!

But at this particular event in 2008 I was absolutely alone, an orphan.

And it was in, like, this big hall of cheese.

I was alone in a hall of cheese. There were all these fancy tables that looked like fantasy cities with towering spires of cheese cascades -- with currants and flatbreads and brie, brie, brie!

And there was an open bar, too.

Anyway, I kept my eyes down. I was terrified and alone, and the only time I'd made eye contact that evening was with a matronly bookseller who'd assumed I had to have been a waiter, so she asked me to bring her a basket of fresh rolls.

What could I do?

I had to bring her some bread!

And she didn't even tip!

Okay. So Michael Grant was there. Towering against the wall, watching my pathetic performance art, poised beside a stack of his novel Gone, and ARCs of Hunger. I believe he held a glass -- Scotch with ice.

When he came up to me, I was nearly convinced he was going to ask me to bring him a fruit bowl or slip me a fiver and ask me to do a card trick, or shit like that, but I was wrong. Michael Grant actually knew who I was. His wife, who is such an amazingly talented writer -- Katherine Applegate -- had actually read my book.

Grant and Applegate -- that's some serious writer shit going on.

Anyway, he said something along the lines of how I looked immeasurably pathetic and didn't I think I should go have a whiskey with him and talk about guy stuff?

He will always be my hero!

My apologies to my usual book borrowers. I won't be lending out BZRK. There's something inside it.

Besides all the gross stuff. 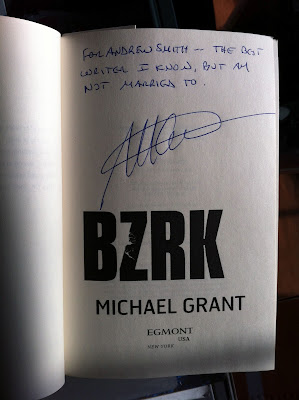