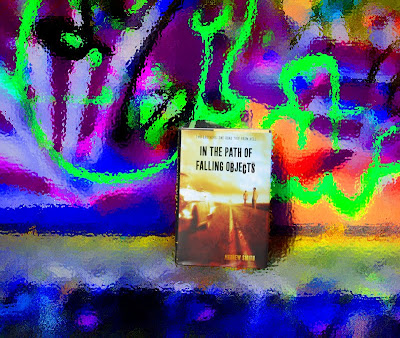 So here I am on ten ten in Tennessee. And I stayed up entirely too late last night.

The last time I was in Nashville, I was in elementary school. My dad was driving through one night and he made it a point to pull our car past the Grand Ole Opry just so he could point it out to me. Now I really understand why Nashville is called Music City, after walking around downtown last night (this morning?).

Last night I got to meet and hand out with author Greg Neri (who wrote Surf Mules and Chess Rumble), and we had some micro-brew beers that were served in bathtub-sized glasses. Greg and I are co-panelists at the Southern Festival of Books today. We'll be giving a talk called "Blood Brothers and Drug Smugglers," a title which an English professor friend told me smacks of communism.

Anyway, I had a terrific time talking to Greg last night. He also writes edgy fiction geared toward Young Adult and male readers, so we had a lot to talk about, and a lot in common. Like, for example, we did talk about drug smuggling and doing bad things and other stuff that I can't remember right at the moment because I'm preoccupied with getting some work done, there's a guy out in the street in front of my hotel screaming something about "the Friday night whores," (but it sounds rather musical, of course, this being Nashville), and it's really hot and I can't figure out how to work this thermostat.

More to follow.
Posted by Andrew Smith at 3:48 AM