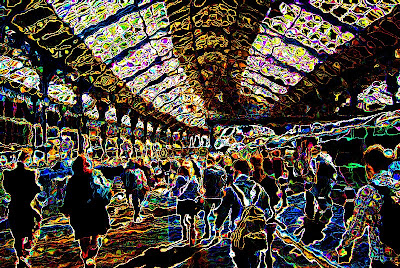 I'm a bit distracted. I slept later than usual, as you might notice from the timestamp on this post.

November is NaNoWriMo, National Novel Writing Month. If you don't know anything about it, you should check it out at nanowrimo.org. I am trying to get as many kids as I can to participate in it.

It isn't as difficult as some people want you to think it is.

I am writing a novel during November, too, but it isn't an official NaNo project. It is, however, why I am distracted. We are just about finished with the work on next year's The Marbury Lens, and the manuscript has gone to copyediting (I may explain those steps some time in the future).

My threadpulling editor wants me to add four small things to the script, though. No big deal for me to do it, especially since they are easy fixes and great ideas (that will also make more pages, which, for some reason, is always something that I like). But it is making me a bit schizo right now.

Because I am writing -- really writing -- another novel. So, it's like having half my head in daytime and half my head in night (which is also probably a good thing, now that I think about it, all things considered). A week ago, I had no idea this novel was trying to get written.

Now it's about 1/4 finished, and I plan on completing it -- you guessed it -- in November.

Over the last week, I had the privilege of going out and chatting with a couple top-notch agents.

[Don't worry -- I am not "looking around." I just happen to know these people]

Two interesting comments from them:

Agent one expressed frustration at the number of query submissions from people who claim publishing credits via self-publishers; as well as the predictability and lack of originality in the majority of submissions received.

Agent two remarked about a frequently asked question regarding dealmaking and the state of the economy, saying that just as many deals are being made, but the deals are different and agents now have expanded job descriptions.

Just thought I'd share those observations for all those people out there poised at the edge of one world and thinking about jumping into the NaNosphere.
Posted by Andrew Smith at 3:39 AM