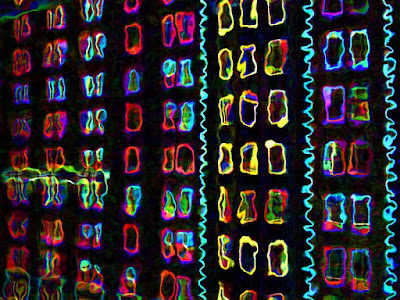 I stayed up entirely too late last night.

The SCIBA Authors Feast and Book Awards was a pretty awesome night, with so many highlights, I don't know where to start.

But I will anyway. First, I'd like to congratulate my friend Michael Grant for winning the award in the kids' novel category. [The actual category was Children's Novel, but I kind of bristle at that word -- Children -- when you lump in YA with it, and Michael's stuff is definitely NOT for "Children"]

And he gave a real zinger of an acceptance speech, too, parts of which, I am certain, are already being quoted in the press and on the blogs (but I can't clearly remember).

Afterward, the SCIBA people gave every author this ENORMOUSLY HEAVY box filled with books. Or maybe they contain the chopped-up remains of the book buyers for Wal-Mart... I don't know because I haven't opened my box yet.

Something, however, is apparently dripping from it.

Best thing: At the end of the night, I hung out until after midnight with the three nominees in the SCIBA Children's Novel category: Michael Grant, D.J. McHale (the Pendragon series), Kathryn Fitzmaurice (The Year the Swallows Came Early), and Kathryn's agent, the incredible Jen Rofe.

First off, let me tell you how much I love these guys. No, there was a distinct absence of "Man Hugs" when the tab was closed. To begin with, Michael and D.J. are both scary. But I marveled at how Kathryn actually made her agent carry around her gigantic book box for her -- all night long.

That was awesome. I mean, who'd have thought that the thing to do at events such as this is bring your "people" to act as expedition carriers.

Anyway, it was a great hang-out session where we all got to talk about books, and Michael and Jen, especially, dizzied me with their knowledge of movers and shakers in publishing and agenting, and wowed me with their use of jargon and acronyms.

I realized that I truly do know absolutely nothing and am a complete idiot... Oh, and I also totally suck at the "Guess how old Kathryn's Sherpa is" game.
Posted by Andrew Smith at 6:41 AM