I have done an awful lot of school visits as an author. And every one of them has given me back more than I've put into them.

But yesterday was something else entirely.

Yesterday, I got to visit the kids at Foothill Technology High School in Ventura, California (with an extra visit from the Middle School kids down the street, too).

This is the truth: I have never seen a group of kids who were more deeply connected to books, reading, and writing than the Angel Potatoes at Foothill. Never.

And I'm not talking about the two or three kids in the group who liked books. I'm talking about all of them, together. It was a freaking literate MOB.

Here's how it happens: This teacher, Kristen, knows and loves books, and she knows and loves her kids. So when she puts a book in the hands of a kid who swears he will never read the thing, she already knows she can expect to see him tripping over stuff as he walks down the hallways because he won't be able to take his face out of the pages.

I saw those kids yesterday.

Here's the other thing: I have been to hundreds of schools. When I left Foothill yesterday, I couldn't help thinking how healthy that school is. The way the teachers interact with students, the way students interact and share their space with others, the diversity of the kids and staff, and the overwhelming beams of brightness and energy that shoot out of these kids' eyes -- it was something I honestly can't say I've seen anywhere else.

It was the best day in a long time.

I got to read to the kids from the following books: The Marbury Lens, Winger, and Grasshopper Jungle.

This is a purely anecdotal conclusion, but I'm pretty sure they liked Grasshopper Jungle the best, because I told them about how many parts of my books are taken from things that actually happened to me, and then I read them a chapter called Rat Boys from Mars and an Unfortunate Incident Involving an Inflatable Whale, about a kid named EJ Elgin... and I warned the boys in the room that this chapter would probably make them squirm and moan.

They kept asking, in horror and disgust, if it was honestly true, what happened to EJ Elgin.

It was true, kids.

And they asked so many questions!

They wanted me to scream at them in German.

It was like the Nuremberg Rallies, only we were all in a good mood and we were more about reading books than burning them.

(They found out I can speak German, so I did say some things to them in German, although I am not a scream at you kind of guy)

One kid asked me this: If you woke up in the morning and you had bear claws instead of hands, what would you do?

My answer was this: I probably would not go pee.

Another student asked me if I had any rituals I performed before writing.

The ritual of the black coffee.

And that is the topic of today's Instagram photo, too: Drink. 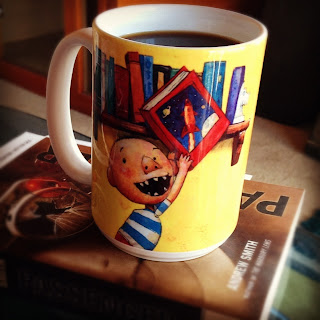