A couple nice things happened over the weekend.

My friend, Michael Grant, posted a photo he took while sitting in a Japanese restaurant in London while reading one of my new manuscripts I'd sent him.

I sent him three new books, so I'm not really sure which one he was reading. I tried blowing up the image, but I still couldn't tell. I have a pretty good idea, though.

Here is his picture: 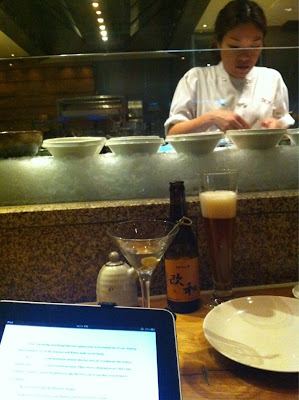 I can guess which book he might have been reading by observing two startling clues: First, the line spacing of the text, which appears to be short and punchy; and, second, the fact that he is having not one but TWO different alcoholic beverages while reading it.

Both these clues tell me he was probably reading Passenger (yes... someone got to read it), which is probably a good book to read while sitting inside a Japanese restaurant in London.

Also, I received a very nice, handwritten (on paper) letter from a young person who'd just finished reading the prequel to Passenger, The Marbury Lens.

Two things: First, I really love it when I get actual paper-and-pen letters from readers. Also, I have had a number of them that said things very similar to this young reader's comments, too, which is pretty gratifying.

I guess books can make a difference in the lives of some kids.

Of The Marbury Lens, my letter-writer said:

"As embarrassing as it is, I can relate to Jack in various ways. Some of the things he has gone through, I have also. And most of the feelings he has are ones that I have. Relationships that he builds and destroys throughout the story are similar to mine in my life... By reading this book, I've come to realize what really happened in my past and how it continues to affect my future..."