the crooked hand of reckoning

I am telling true stories this week. They have been requested.

I may have told this one before, but chances are you haven't read it. I am, after all, a bit of a hipster author. You probably never heard of me.

When I was in elementary school, it was not at all uncommon for teachers and principals to spank kids who didn't quite live up to their expectations. It wasn't actually spanking. It was, in honesty, something much worse than that.

And before I even begin, let me answer the question you are undoubtedly thinking:

Yes. I admit it. I was spanked -- beaten by teachers AND principals -- in elementary school and in junior high, too. I probably would have been beaten in high school, but it was against the law by that time.

In high school, they suspended me.

None of it changed anything.

Here is a question I am asked quite frequently: How did you get so twisted?

The elementary school I attended for a while in Washington State was very much like the schools described in my novel, Stick. Same place, same systems.

And because the school was in Washington, all the classroom doors were on the inside, opening onto long, dark, linoleum-paved hallways.

Did I mention that it was perfectly okay for school staff to beat children in those days?

When I say children, I mean boys. For some reason, girls never did anything that required a beating.

The school was in the woods. During recesses, we (boys) would usually go out into the woods, which was not really allowed, but the school was not fenced, it was THE WOODS, and we were boys, also known as "children who get spanked."

So it was that just about every day after recess, one of us would be sacrificed to the paddle.

Yes, they used a big piece of wood to hit boys in those days, too. Nothing at all wrong with that idea, some wise old pedagogue probably said.

When the spankings occurred, there would actually be a sort of bizarre ceremony involved. The boy to be spanked would be taken out into the middle of the long linoleum hallway, then all the other boys in all the other classes would be called out into the hall to watch.

Not the girls, just the boys.

They made us watch.

The swats would echo, invariably punctuated with whining yelps and cries.

That's not even the bad part.

The bad part was this: The principal, the man who delivered the swats with the big piece of wood, was missing an arm. He had a prosthetic metal hook. And he held the paddle in his hook.

I am not making that shit up.

That shit was real.

This helped form us boys into the adults we are today. I think some of the boys from my school ended up murdering their parents and shit like that.

And speaking of The Marbury Lens, yesterday I received an Advance Copy of its sequel, Passenger. 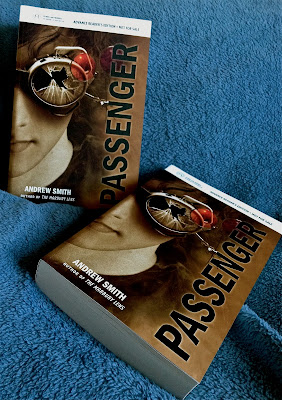 Nobody has read this yet.

I gave one to my son, who is home from Cal Berkeley for Spring Break. After he read about 100 pages, he said to me I think this is possibly even grimmer than The Marbury Lens.

I heard him walking around at 2 in the morning. I think he stayed up all night to finish reading it.