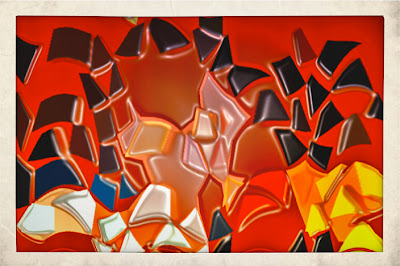 Chickens, again unlike cats, are also not finicky eaters.

I have never seen a chicken vomit.

And if chickens were the size of grizzly bears, I am certain they would eat people.

That would be cool.

Research geneticists at Osaka University in Japan genetically modified mice so they could chirp like birds.

Why the hell would anyone do shit like that?

I don't really want an answer to that question. It is more or less rhetorical.

Then they get out their little Petri dishes with sperm and egg cells and go to town!

What crazy parties those genetic engineers must have!

So I'm just waiting for them to pull out the "chicken" strip from the creature jar and the "size of a fucking grizzly bear" strip from the characteristics jar after they've knocked down a few quarts of vodka.

We already know what they did to every goddamned vegetable we stuff down the throats of our children.

But I got off track here. More or less.

Our chickens, who were happy free-roaming non-genetically-modified hens, would always return faithfully to their chicken coop every night.

Hmmm... I've considered turning this into a picture book for kids, but I am told you are not allowed to drop EVEN ONE f-bomb in kids' picture books.

Who makes up such rules in this world where it is okay to just set drunken genetic engineers free to fuck with the machinery of evolution and natural selection?

That is also a rhetorical question, more or less.

If you have a big, wide-open chicken house, as we do, you are also going to attract mice.

The real kind, not the fucked-with kind that chirp like birds.

Anyway, whenever I'd go inside my buff Orpington hen named Lucky's house to feed my hens, if I'd kick around the straw, I could always stir up nests of mice and send them running around all over the floor.

My chickens used to like that very much, because they would actually chase the mice and eat them.

I am not making that up. It is another reason why chickens are superior to cats, and, believe me, I did not party with genetic engineers to elicit that particular quality in my hens.

Partying with genetic engineers would be really creepy.

So, this is how Lucky, my buff Orpington hen, finally died:

One morning, I went out to the barn to feed the horses, and I found Lucky, expired, a mound of ginger-colored feathers in the dust outside the henhouse.

Lucky tried to swallow a mouse that was too big for Lucky's normal-sized chicken's throat.

The mouse was also dead, and its hind quarters were sticking out of Lucky's non-chirping beak.

This is how natural selection, in my estimation, will drive chickens to evolve to the size of grizzly bears.

And when that happens, genetic engineers better watch their fucking backs.