a repository of cast-off consonants 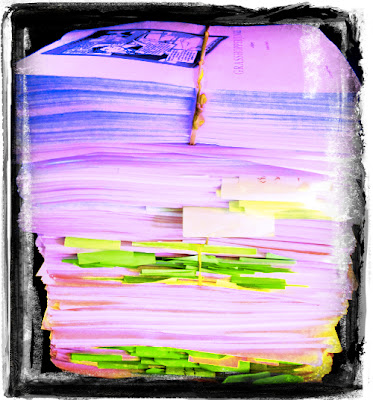 I have been cleaning my office this week.

Well, not today, because I am up in Berkeley.

By Tuesday of next week, my goal is to have an office that is so clean and spacious, it will say to you, "This would be a nice place to commit suicide."

To me, that is the number-one quality I look for in an office.

After all, writers have suicidal impulses in their blood.

This is a stack of original manuscripts that were scattered around the floor of my office. I piled them up and took a picture of them. I have not thrown them away yet.

The stack is higher by two manuscripts now.

Well, actually, by about one-and-one-half manuscripts.

When I cleaned out my car to prepare for the road trip of driving my son up here for his spring semester at Cal, I found a complete manuscript for Stick (my novel that invisibly came out in October), and about the middle-half of Passenger, the sequel to The Marbury Lens that will be coming out this October.

So, yes... those manuscripts, for the most part, are not in order, and there are some "chunks" floating around inside the jumbled stack. But there it is.

I have two news updates on Passenger, too:

The first one, I cannot tell you yet, because I am not finished thinking about it and I have other shit to do this morning.

The second one is that the package of pages (which happened to be my favorite part of the book) that I MAILED to Ian on the other side of the country on December 7, finally got to him. It took more than one month, and Ian ended up getting two packages from me -- the second of which I shipped via UPS which included a different set of pages and a handwritten (in seven-year-old's script) letter and poster, and was delivered to him in just a few days.

I am happy the kid scored twice, and relieved that the US Postal Service did not lose those pages and proved that I always do what I say I'll do for the kids who deserve good things.

Who now has about 20 original pages from the manuscript for Passenger.

The rest of it is in that stack up there.