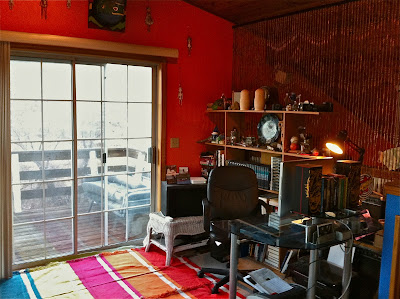 This is where I write.

No, you can't see the stack of manuscripts here. They are in the other corner, beneath the Conor Oberst concert poster.

Last week, I got to have a look at some of the sketches illustrator Sam Bosma is doing for Winger.

I really hate it when authors say stuff like, "Oh, I adore the cover of my new book, but I am not allowed to show it yet. Squee."

Winger is coming out in spring of 2013. That is a long time away, I realize, but artwork for something like this is quite a bit of work.

Let me tell you a little bit about the book.

This is from my website's description:

Fourteen-year-old Ryan Dean West may be the smartest 11th grader in school, but there are some things he just doesn't get. He's convinced that the woman living downstairs is a witch -- out to destroy his life; believes the girl he's in love with only sees him as some kind of pet; and wonders why his best friend -- the only voice of reason in Ryan Dean's life -- likes other boys more than girls. A funny, sometimes dark, part-graphic YA novel about fitting in, and the consequences that can occur when big deals are made over small differences.

So the book has illustrations in it. Ryan Dean West sees his life as a sort of self-deprecating comic, and he has an interesting interpretation of his reality. Ryan Dean likes to explain things through charts, graphs, notes, and other stuff that pops out of his head.

I can't imagine a cooler, more appropriate style for the illustrations than what I saw in Sam's sketches. If there is some way that line and shading can mesh with a narrator's voice, Sam has found it.

This really is going to be an amazing, one-of-a-kind book.