the q and the a 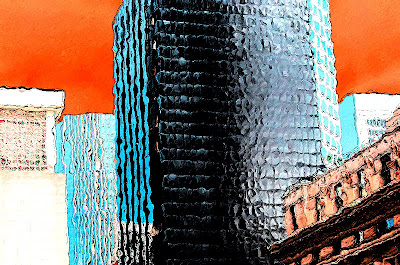 I sat down recently with a pre-screened, frisked, and cavity-searched reader, who had a few questions about the blog having been taken over by Bad Existential Sockpuppet Theatre (B.E.S.T.) recently. Time, I suppose, to come clean and share:

Q: What, honestly, is running through your mind as you create B.E.S.T.?

A: I believe I am channeling the spirits of the creative masters. But, then again, I did attend several Grateful Dead gigs in the seventies, and there was always this great-tasting punch being passed around.

Q: I don't think it's funny at all. Are you laughing when you make these things?

A: I never laugh. When we're on the set, shooting B.E.S.T., I am usually dressed entirely in black, smoking unfiltered Gauloises, wearing a beret, thinking about my next tattoo, listening to the Smiths on my iPod, and weeping uncontrollably. Oh.. and drinking absinthe.

A: Dude, what does Wal-Mart have to do with Christmas?

Q: Tell me about the cast and crew.

Also, I do all the arm-work and cinematography, as well.

Q: It must be difficult, for example, to shoot fight scenes and the infamous ketchup scene AND do the camera work, all at once.

A: It's all about timing. I'd ask someone in my family to help out, but God! I am so tired of being taken away for all these endlessly inconvenient "Seventy-Two-Hour Observations."

Q: But you've left us hanging. When, for the love of God, will they be back?

A: Ask me that tomorrow.
Posted by Andrew Smith at 5:00 AM