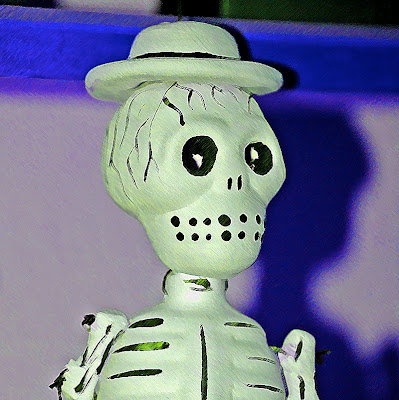 Well, it's likely that were it not for the nameless throngs of anonymous readers, there'd be a significant dearth of chits in the ol' suggestion box. So I'll try this one.

A couple days ago, someone asked:

Where do you get your ideas from?

What ideas? I have ideas?

I don't think so.

If you've got some kind of idea that I get ideas, you've got the wrong idea, buddy.

The other day, I had what seemed like a great idea: I was going to take a shower. But when I got into the water, it became strikingly apparent that my water heater was broken. At that moment, not a second sooner or later, I got the idea that taking a shower was probably a bad idea.

That is exactly how I get my ideas.

And who knows where they come from?

I could just have easily gotten the idea to have a ham sandwich.

But I will tell you an idea that's been bugging me lately. It has to do with Carl Jung. You see, when I was young, I had the idea to read a lot of Jung. I had this idea that he knew what he was talking about. Still, to a large extent, I suppose, I still have this idea.

Even if he was a nut job.

I wonder if he ever played with sock puppets.

In any event, throughout history there have been scores of thinkers, inventors, and artists who believed in this idea of a sort of "collective unconscious" that's out there -- capable of being tapped into. Carl Jung wrote of it, "It ...seems something like an unceasing stream or perhaps an ocean of images, figures which drift into consciousness in our dreams or in abnormal states of mind."

2. I believe that's where my ideas come from.

Any questions?
Posted by Andrew Smith at 3:10 AM