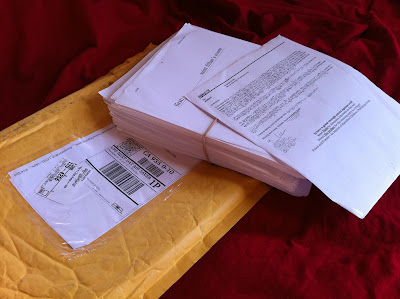 Yeah... I blurred out some of the stuff in the picture -- like my secret undisclosed location. Note the "Next Day" delivery sticker, though. Where I live, no matter the service, "Next Day" means "Just Kidding."

Anyway, this is 2011's offering: a very different novel called Stick. I have to say, too, that I like this book very much. Of course, I may not be an unbiased judge of such things.

So I'm not going to say anything about the story beyond the vague description that it's postmodern. Oh, and you can probably see that the first part of it is called "Saint Fillan's Room," which I also think is pretty cool.

I also blurred out my editor's letter to me (except for the very last part where the editor calls the book "beautiful"). And that is the entire editorial letter, too.

That doesn't mean that I don't have work to do on this, but my editor and I know each other well enough by this point that I get the picture. Also, there was a last chapter that I kept out of the book when I originally submitted it. I struggled for days about whether or not to include that final chapter, and I ultimately decided to leave it out, mostly for personal reasons.

When I send the book back in, I'm going to send in that last chapter with it. The editor is interested in seeing what it said. Whether or not it ends up in the final version of the book is yet to be determined. I still have to think about that.