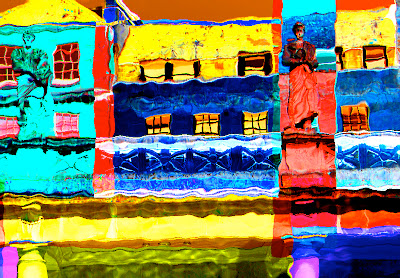 You know the old line about books and covers.

Something about the email over the weekend, and plenty of other comments about The Marbury Lens I've received so far seem to echo a common thread among readers: This wasn't what I was expecting.

Thank you. It looks like my work here is done.

I think there is something almost like a mass-hypnosis that is inflicted upon many readers of genre fiction -- due to the strength of connections that form between the synapses in their brains -- that causes them to expect the book they pick up to adhere to certain very predictable elements.

YA is a particularly viral carrier of that affliction. It's reinforced by authors who continually write the same story, but change the names of the characters; or by those who perpetuate the idea that the following three roadmaps are the only ways to get to the final page of a novel (thanks to my well-read friend Sarah for suggesting these templates):

1. The good girl meets bad boy and she fails at school.

2. The nerdy boy who comes into his own through sports.

3. The kid with the rough family who finds his niche.

But when you get into fantasy/speculative fiction as a genre, the roadmaps -- the expectations -- are even more confining (which is kind of strange, because you'd thing fantasy/spec. fic. would not be so adherent to preconceived rules). Couple those limits with a hint of "Steampunk" and your readers are going to expect a lot of concrete, predictable things to pop up from the pages.

There's nothing wrong with convention or sticking to a formula. It's why Campbell's soup is still an overwhelmingly popular brand. You know every time you open a can exactly what's going to be inside it.

I prefer the kind of soup that, when you open it up, eats you instead.