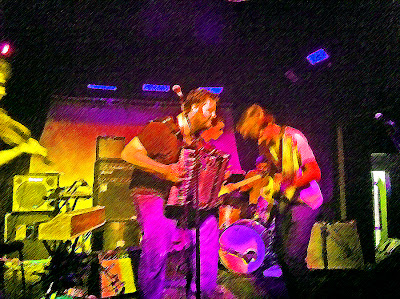 Today's selection for the kids comes from the book that has probably been more influential to me than any other novel: The Adventures of Huckleberry Finn, by Mark Twain.

And, it's kind of fitting that I mention that particular book as selection number four in my kids' read-alouds for Banned Books Week, because last night -- well, actually, up until just a couple hours ago this morning -- I took my son down to Los Angeles to see his favorite band in the world, The Felice Brothers, play a very personal show in a tiny, unmarked club barely bigger than our living room.

We had to cheat to get him in the club (no minors allowed), but the ethical transgression was worth it. And, I know, teenage boys are supposed to be all into Hip Hop and stuff like that, but not my son.

So, not only were we there for this most incredible show, standing right next to the performers (I've been to more crowded keg parties), but we got a special treat in that Conor Oberst was the opening act -- so it was actually like two amazing concerts (in your living room) in one.

What does this have to do with Mark Twain? Well, I'll get to that in a minute. But first, anyone who is very familiar with The Felice Brothers knows that they toss around quite a few literary references -- mostly American novelists.

Among the snobby beliefs I have, I adhere to a firm conviction that American novelists, as a group, have written the greatest works ever to be published. Save your protests, please. I'm functioning here on one hour of sleep in the past two days, but I am still thinking clearly. It's my opinion and you're not going to change my mind by expressing your indignant outrage over my dismissal of Proust or Dickens, Dostoevsky, or anyone else.

Anyway, the thing that makes The Felice Brothers so great is their essential Americanism. When you look at their assortment of battered instruments which includes a washboard (that got worn flat by the end of last night's show) used to smash into crash cymbals, you might think that these guys make do with what they have. On the contrary, true to the ingenuity of their pedigree, they don't just "make do," they make something that amazes and inspires.

Their last full-length LP is titled Yonder is the Clock, and it includes some particularly well-written songs that dig much deeper through the dimensions of the American experience than a first listen may lead you to conclude.

And the title of the album comes from Twain -- in particular, from this passage from his novella, The Mysterious Stranger:

By profession I am a fortune-teller, and I read the hands of you three--and some others--when you lifted them to stone the woman. One of you will die to-morrow week; another of you will die to- night; the third has but five minutes to live--and yonder is the clock!