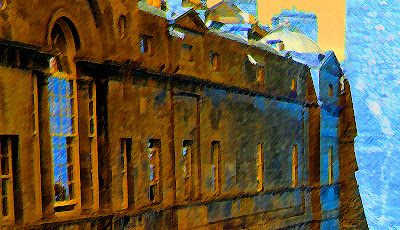 By the way, I purposely made yesterday's post more than a bit vague for a number of reasons.

First off, WIP is writer jargon for Work in Progress, although I am fond of the idea of Women in Prison, as Connie theorized.

Also, although I heavily implied it, I am not abandoning my WIP, although, as Brian points out, sometimes we just do that, because it's right. And, like Brian, I always save my projects that I've walked away from. As a result, every book that I have ever published has passages in them that have literally been cut and pasted from things that I've stopped writing. Sometimes, that kind of makes me sad because I had intended to make entire standalone novels from them... but... eh... whatever.

If/when you read The Marbury Lens, this may be rather apparent in the story of Seth, a kid who lived in California during the 1880s (a time that I am particularly drawn to, and NOT because it is "Steampunk meets Mark Twain"). His story was going to be an entirely separate novel, but I liked how it just fit into The Marbury Lens. And I have another, completely-written and separate novel that also takes place in California during the 1880s, set in Napa Valley, which is where Seth's story also happens.

Okay. That said, I did not mean to give the impression that my current WIP was being terminated. Quite the contrary, my current WIP is terminating me.

What happens to me is that, when writing, once I get to the point in the novel where the thing that must happen happens, then the arcs of the stories within the novel all come together. The end is in sight. Not just a light at the end of the tunnel -- the END of the tunnel.

At that point, the novel basically writes itself. The real work is finished. It's like cruising downhill to a finish line in a marathon -- there's no way it won't end now, and it's on autopilot.

THAT is a good place to be, especially when you know that all the loose ends are coming together, nothing's going to be left unresolved, and you've actually figured everything out and gotten all the ingredients properly cooked.

That's when a WIP and I part ways.