what keeps me writing 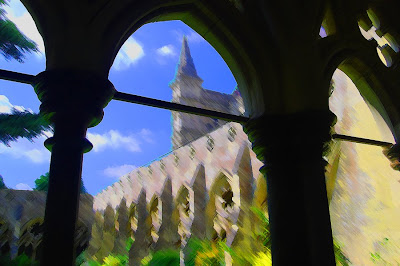 Well, I saw this question addressed on my good friend Kelly Milner Hall's blog, so I thought I'd respond to it, too. The question, as the title of this post implies, is What keeps you writing?

Ever since I read Kelly's post about this, I've been asking the question to myself. I guess I never really thought enough about it to be able to articulate an answer in words.

Sure, the money has been really nice, but it never was about that... and, unlike Kelly, I don't write to pay my bills (as much as I'd like to). But for now, money? No way.

Sometimes -- no, a lot of times -- I get pissy and swear to myself or anyone who'll listen that I'm never going to write again. Mostly, I think that's because of the business side of writing. I've always hated business stuff, and I'll never be able to get over it, I think. Another friend, Michael Grant, expresses it perfectly in his little bit about The Deal -- how it hangs over your head and you can't think about anything else... but you're supposed to be writing.

So... what keeps me writing? Well, this isn't egotistical -- I am not egotistical, despite the voice on many of my posts -- but, I think I'm pretty good at it. And I think I can be better. And I believe I am getting better, too.

So, I'm kind of in competition with myself. And as long as I'm satisfied that every new thing I write is maybe just a little bit better than the last thing I wrote, then I have to keep doing it.

Honestly, when I put out that one piece that I believe is perfect -- that I can't possibly do better -- then I will really, truly, stop. Not the pouty stop -- the I've-completed-my-final-footrace stop.

So, since a kid picked and wheedled me about this yesterday, I will admit here that the book I am currently working on, which is called The Marbury Lens, is pretty goddamned good.
Posted by Andrew Smith at 3:56 PM