the kids are alright 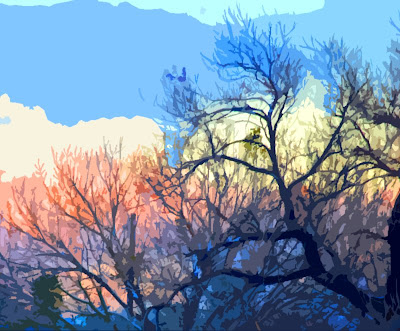 Sandra Rayl is half wrong.

I went to visit her Creative Writing class yesterday, at Newbury Park High School, and before I left, she remarked how my visit helped to charge their batteries. Well… it actually helped to charge mine, too.

I mean, being around those brilliant, creative, and motivated kids was something else for me. Oh, and the best thing… well, not actually the best thing, but a pretty good thing, is that Newbury Park runs on a block schedule, so I got to visit the kids for a couple hours.

And they asked great questions, too. I almost wished I would have taken notes on some of them… they asked about character, story vs. message, all kinds of stuff that showed me just what an amazing teacher Sandra is.

But they mostly wanted to know about writing, the discipline involved, the yuck! business aspects, and how to get around blocks, or what happens more often to me – log jams. That’s where I get too many ideas going on at once.

So I talked to them about all my books that I’ve written so far: Ghost Medicine; in the path of falling objects; a historical novel, my second one, called Bird, which takes place in California in 1881, during the week of the Garfield assassination -- a story about a really smart kid with a really dark secret; a fourth novel called Winger, a contemporary YA about the consequences of focusing too much on the slight things that make us different; and the novel I’m currently writing – a kind of urban fantasy that isn’t really a fantasy, about a kid who gets kidnapped, runs away, and becomes a reluctant back-and-forth traveler between the present world and a world of last days – called The Marbury Lens.

At their request, I read to them from the beginning, middle, and toward the end (without giving away any spoilers) of in the path of falling objects, and they were hooked right away. It’s such a different story with such addictive voices, how could they help themselves? And... they were the first people EVER to get to hear those parts of the story.

A couple of the kids spoke with me personally afterward about how much they want to grow up and become writers. Okay... that was the best part of the day. Now, there’s nothing wrong with math, engineering, and science, but… come on! so many schools and learning communities ignore or discourage the creative impulse in kids. It’s like in some parts of the country, kids are never even told that you CAN grow up and be a writer.

If you work at it.

We will never NOT need writers, but some of these kids were so fired-up when I told them that, yes, there are lots of ways to go about becoming a writer, and plenty of viable career paths to do it (and, yes, at times like these I like to talk a little bit about one of my heroes, editorial assistant Allison Remcheck). So I talked to them about things like MFA/Creative Writing programs and what kinds of jobs you might look for coming out of school with that background, or as an English or Lit major… and it was like they’d never heard of such things. Ever.

One girl, who shall be nameless (but I happened to pick up a short story on the teacher’s desk before the class began and I read the first couple paragraphs – mature, great voice and mechanics – and I said, Wow, this kid can write!. I would definitely want to read on… and it was her story), she told me about how her parents didn’t really want her to go to college to be a writer.

I think we do have enough scientists and chemists.

Give your kids a break.

No… give your kids a push.

Then I met this boy who was particularly enthusiastic about our class session. He probably could have talked and asked questions all day long. Great kid.

Oh. He blogs, too. I asked him his blog address so I could check out his writing. I’m not going to mention his name because I think he prefers anonymity, but his blog is called Chocolate Hammer. Wait… don’t go there yet… hear me out:

I told him that I’m not a particular fan of fantasy – even though I’m currently writing an urban fantasy that’s not really a fantasy – so he knows I’m a hard-sell on the genre.

(Note: If you are a kid from Sandra’s class, you now MUST stop reading this)

So… I popped over to his blog.

What can I say? The kid can write. He actually has a voice, something that is rare. And he’s just a little kid!!!

If Jake from Stupid Blog Name wasn't already picking out the tux for the wedding with my 11-year-old daughter, Chiara, I'd want this kid to marry her.

Okay, now you can pop over and visit Chocolate Hammer.

Thanks for having me out, Newbury Park kids.

It really charged my batteries.
Posted by Andrew Smith at 6:47 AM