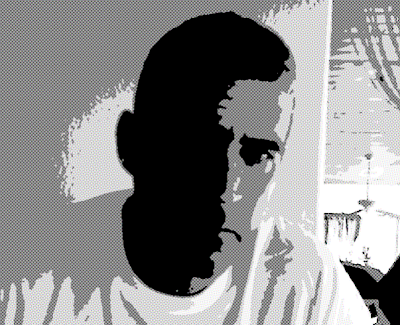 I mean the energy drink stuff. Well, and zombies, too, but that's another story.

So I drank one just now. Well, about a half hour ago.

Not a zombie. A Monster. The coffee kind. It was sweet. But it tasted good.

When I woke up, the temperature outside was 28 degrees. Not Celsius. But right now I am sweating like the lone Mormon at a beer-bong party. Really.

I see kids drinking these things all the time. Even the really big ones with the screw-off tops. Not kids with screw-off tops. Monsters. I had the smallest size can they make. But my stomach is knotted and I am gripped by paranoia... Yeah, the man is out to get me.

I don't bite my nails, but it seems like a pretty good idea at the moment.

At three in the morning. The rest of the house is going to love that. Maybe I should give them all a Monster. Perk them up.

I realize these are the shortest sentences I've ever written in my life.

It bugs me when people say, "You can't have sentences over 15 words long."

Next person who says that, I'm punching them in the face. As long as they say it before I come down off this Monster. Like, in the next 15 minutes. Because I'm a pretty peaceful guy. That's what everyone says to me. Between my killing sprees.

It also bugs me when people say "hecka," or the edgier, more daring "hella."

Or when I'm at the grocery store and the cashier asks if I found everything okay.

And I say, "No. I had to beat the living crap out of your boxboy to make him tell me where the Monsters are."
Posted by Andrew Smith at 3:31 AM