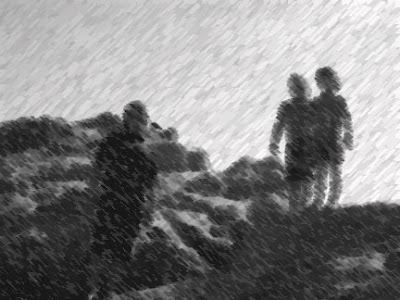 This has nothing to do with movies.

I never go to the movies. I know... it's not that I'm crotchety and anti-social, I just prefer waiting for movies to come out on DVD so I can stop watching them when they suck.

Can I tell you about something that bugs me?

What bothers me about the current state of YA literature is the general and stubborn practice of "not getting it" when it comes to boys. Now, before you get all worked up over the exceptions you will validly be able make about my following statements -- don't. I'm not talking about "everyone," or "always," two words teenagers should "never" be allowed to use. I'm just talking about generally pervasive trends.

So, don't go to but-what-about-so-and-so land.

Complaint #1: Boys act the way girls expect boys to act in most YA novels. Not getting it. Stereotypical and just plain wrong. That would be like me writing a book with a teenage girl protagonist who dreams of one day having her very own ironing board -- just like mom -- so she could win the heart of the boy she's crushing on by pressing his marching band trousers.

I once got a review from a reader of Ghost Medicine who really liked the book, but she said she didn't believe that teenage guys could be so introspective... that it seemed unreal.

Well, yeah... that's because you've probably been reading too much YA about boys who don't act like boys. And, besides, the boys almost never talk about feelings with each other... they keep it on the concrete level, talking about ghost stories, castrating horses, building forts. The one time in the book any of them really talk about feelings is when Tom and Troy talk about losing their mothers.

Heck, I talked to my buddies about losing my dad when I was a kid.

As far as the narrator goes, well... he's bound to be introspective in his tale, but the story is being told mostly in his head.

The point I'm making here is that there are too many YA books that shortchange and two-dimensionalize what boys are really like during their coming-of-age years. Not all of them; some of them.

That does a disservice to readers, and boys in particular.

That's just one complaint about the XY in YA. It's a substantive issue, though. There are far more procedural mistakes we make when addressing the whole getting-XY-YA-kids to read thing, and I'll be talking about those issues, as I so often do, too.
Posted by Andrew Smith at 3:50 AM