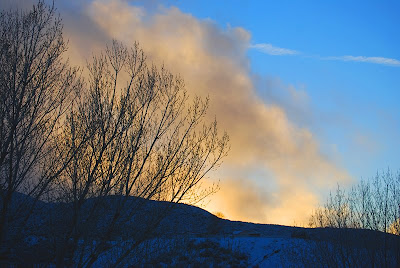 -- I found it very difficult to write much today, so I stopped pretty early. Some writers set quotas for their daily effort. I do that, but keep mine small so I don't disappoint myself. I didn't make my quota today, but I'm not disappointed, either. What I wrote was pretty good.

-- One of the reasons I stopped so early... it's Kelly's fault. She's reading a manuscript that I sent her, and nobody else IN THE WORLD has read it -- besides my agent, who loves it. Nobody. And I really want somebody else to read it... but I never let people in my family read what I write. So, anyway, since Kelly's reading it, I dug it off the floor of my office, where it has been buried since September, when I sent it to my agent, and I started reading it this morning. And I can't read something I've written and work on something new at the same time, because it makes me crazy. Well, crazier than I am... because everything I write is so different in every way.

-- That brings me to this idea that I saw kicked around on another blog about "branding" an author. I don't think I'm "branded." Ghost Medicine and in the path of falling objects are completely different, and the other novels I've written are... wayyy different.

-- A complete stranger came up to me today. He was carrying my book. He knew who I was and told me how much he loved the book. He asked me to sign it, and we talked a little bit about the next book coming out. He asked if it was going to be a sequel to Ghost Medicine, a question I get asked a lot. Nope. If/when I do write a sequel to Ghost Medicine, it will also be a sequel to in the path of falling objects, where one of the characters from that second book wanders into Three Points. Ooooh... yeah. So there.

-- Cat with broken leg update: The broken-leg cat is healing up. It has the most exaggerated lurch-limp when it walks on its Richard III front leg. I thought about naming it that... am also considering "tripod," but still... eh, I don't think it has really gone far enough on the evolutionary scale of coolness to have a name. But I'm thinking about it.
Posted by Andrew Smith at 3:32 PM