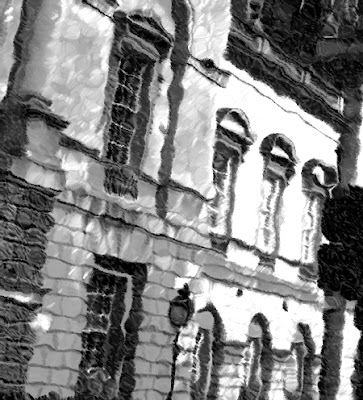 One last thing about some names mentioned in The Marbury Lens.

The first two names listed in my acknowledgments are Craig Morton and Dean Shauger, guys I've known for a few years now. When I started writing The Marbury Lens, I knew I was getting into unfamiliar territory for me as a writer.

I really wanted to accomplish two things: I wanted to write something that was really scary, and I wanted it to be a kind of psycho-speculative work that was different from everything out there in fantasy/horror/science fiction. Avid readers of speculative fiction/sci fi are a tough lot to convince, so I needed to talk about Jack's universe, how it's built and held together -- Jack's laws of physics, as it were -- with smart young guys like Craig and Dean who really know this stuff.

So I talked to them for a couple hours one day while I was writing the book, laying out all the mechanics of Jack's layer-upon-layer universe, and just talking out the story and the structure helped me see that what I was imagining could be possible, and could be pulled off under the scrutiny of a couple guys who are very well-read in the broader genres into which The Marbury Lens overlaps, and they're smarter than I am when it comes to physics, too.

Research is the backbone for any believable story. It isn't only a necessity for nonfiction writers. It's also a pretty fun thing to do for fiction, especially when it involves travel and getting into the worlds of your work -- like spending time in London and Blackpool, or riding around on British Rail, for example.