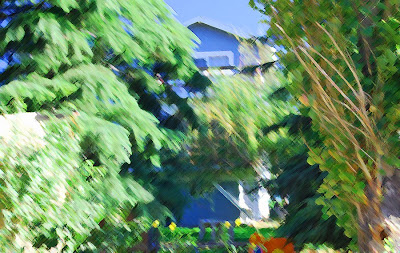 Even though I live in California, there are some characteristics of where I live that are uniquely non-Californian.

For one thing, it is twenty miles from my home to the nearest traffic signal or grocery store. The only way to get to my home from "civilization" is by following any one of a number of winding, two-lane mountain roads. When we first moved there, my son was a toddler and my daughter was only weeks old, so we did a lot of driving up and down the mountain with both of them snugged up in their car seats.

Early on, we noticed a frequent sight. A strange man who wore a heavy coat riding his bicycle up and down the canyon road every day. What was strange about this guy was he'd wear that trench coat even on days when it was about a hundred degrees, and his bike had no gears... it was an old cruiser-type thing. When we first saw him, he always had wild hair and a long beard. My son would ask about him when we'd pass him, and I began making up stories about him. I told my son the man's name was Rasputin.

Rasputin became almost a family member. When we'd pass him, my son would say, "There's Rasputin," and one of my daughter's first words was... of course, "Rasputin." After a few years, we stopped seeing Rasputin.

Small towns being what they are, we began asking our neighbors about him.

"Do you know what happened to Rasputin?" we'd ask.

And it seemed like every family had their own made-up name for him.

"You mean Hungry Jack?" a neighbor would say.

But no one really knew anything about him. And he was suddenly gone.