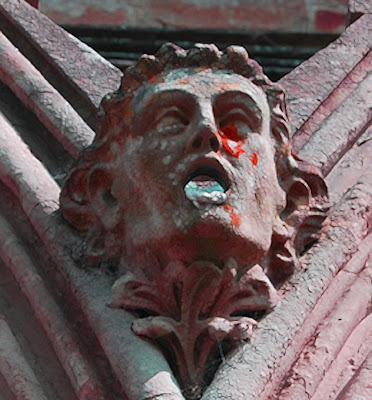 Well, here we are at the end of a week.

Tomorrow is my first post-release signing at Barnes and Noble in Valencia. I'll have pictures taken so I can show how many people attend. I'm not nervous or anything, but I'll probably rip my pants or something dumb right before it starts. Things like that tend to happen to me, and, despite the release of Ghost Medicine this week, today has been one of those nothing's-working-out-right Fridays.

Well, no one's talking to me anyway. So, eh.

I did get a really nice series of messages via email and on my Facebook from people who've already gotten copies of Ghost Medicine in their hands. Some of these are from friends in the writing biz, and some are from former students who still (God only knows why) stay in touch. Most of them are off at incredibly prestigious schools and academies all over the country.

Well, I must admit, your book was extremely good and I can't wait until the next one comes out next year! It was a great writer's technique to have that foreshadowing at the beginning of what would happen by the end because I was wondering how it would all piece together. It really turned out great! The details made me feel like I was there and that's kind of how I could tell that made you had experienced something similar. But I went by Barnes and Noble today to look for the book and I couldn't find it! I was just wondering if maybe it wasn't going to be released there until tomorrow at your signing or if maybe I just couldn't find it. I hope that everything goes well tomorrow at your signing. I know that your book is going to have a great deal of success!