the hand that rights 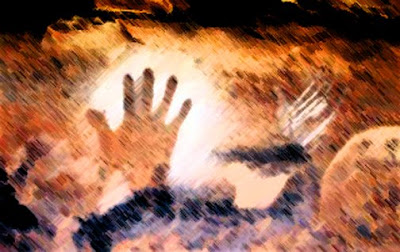 Sometimes, the hand that corrects me when I'm drifting off course is not mine.

I wanted to go back to a couple of things I'd put up in some of my earlier posts, but not yesterday's. I shouldn't have posted that one, but now that I left it there for so long, I'm not taking it down. I did that once before one time when I wrote about how my brother died when I was a young punk (hmm... sounds like Ghost Medicine). And I'd written that one on the anniversary of his death, but as soon as I put it up I got scared and took it down.

Well, enough about that.

A few days ago, I wrote about sounds. I mentioned something about the audiobook version of Ghost Medicine, and how I'd gotten a copy of it, but wouldn't open it. Well, the reason I came to have that one copy is that a friend of mine (Ross) is the son of someone who works for Random House. When I told him the audiobook was out, but I didn't know what it even looked like, he called his dad and had it in his hand the next day.

Today, when I came home, there was a case of them on my doorstep from Random House. Thanks very much. I opened one, and the CDs look awesome. They are imprinted with the cover art and every one of them has my name on it. Loving music as much as I do (I had been a professional musician at one point in my ridiculous life), it's kind of hard to express how cool it is to see a box of CDs with my name on them.

And I'm not going to go into too much detail about this, but a few posts ago I ranted a bit about how much it sucks to be a debut author. I did it because I wanted to tell the honest truth to people who feel so driven to write and get a novel published.

Okay, so now, without it being requested, I want to say why being a debut author is so rewarding. It's an incredible experience being a debut author when someone that you've never even met comes up to you and wants to talk about your book or writing. It's great to be a debut author when you see a kid reading your book, and you can tell he's been carrying it around everywhere because there's no book cover on it and the spine is all bent inward and the pages look smudged, and that particular kid has never even talked to you before, but came up to you today to tell you he finished reading your book, and when was your next one going to be out? It's awesome being a debut author when you get an email from some librarian on the other side of the country who said she read your book and fell in love with it, or when you get a message from someone who works in publishing (at a different house) who tells you how much they liked your book. And, it's great being a debut author when someone asks a question about what something in your book means, and how did you come up with a certain character or place or event. And it's nice, too, when newspapers and radio stations want to talk to you (but I NEVER listen to myself or even read the first word from any article that's ever appeared in the press about me). Sorry, reporters, but that's the truth. I don't want to read or hear about me.

And, as far as listening to the audiobook is concerned, I think I'm with Laurie Halse Anderson on this one. I just don't think I'm going to do it. But my son is putting it onto his iPod. I'd be very happy to donate some audiobooks to charities, though, like kids' libraries or literacy programs, or especially to hospitals or other programs where readers might be physically impaired as far as books and pages are concerned.

Please contact me if you know of any such programs in need.

Finally, I did send a copy of Ghost Medicine to my friend who lives in China (and he loves it), and today I signed copies for friends living in Australia, as well. So, I have a few more continents to go. I'll send one off to the first person in Africa and in South America, too, who requests a copy.