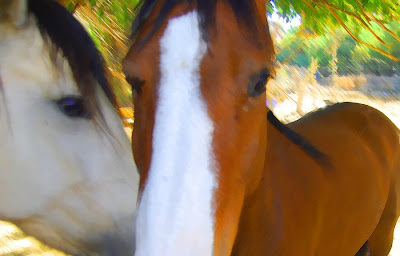 I had a film crew up at the ranch today to make a short author promo about me for the Feiwel and Friends website. It was actually a very fun experience, and the kids who shot the film were extremely professional and nice to be around.

The video was about me and one of my horses, Dusty. I'm not going to go into too much detail about Dusty, because she is the subject of another blog post I've written for Feiwel and Friends that will probably be coming up in the next month or so. Suffice it to say that Dusty has an amazing story about where she came from and what kind of horse she is today.

Well... actually, today Dusty was being kind of a pill, but she's usually very well-mannered. Like the Dusty in Ghost Medicine, my Dusty is also a silver buckskin. Unlike the Dusty in the book, though, mine's a girl. I didn't name Dusty after the character horse in my book. On the contrary, I had to change the horse's name in the book when my daughter named the horse we brought home a couple years ago.

Usually, Dusty loves to have her picture taken, but today, with a crew of four cinematographers, two big cameras, a boom mike, and those big white reflecting boards that I don't know what they're called, and to top it off, separating the other two horses in the upper corral, it was a little too nerve-wracking for my suddenly camera shy buckskin. So she kind of threw her weight around, didn't want to stand still, pushed me with her big head, and wiped grime and snot all over me every time I'd try to speak on camera.

Hopefully, we'll manage to get a couple minutes of video out of it.

At the end, the director asked me what I'd like them to do as far as the editing was concerned, and I told him to go ahead and make me look as stupid as he wants to... which, based on my recollection of what they must have filmed, won't be too difficult.

When the video is finished, I will post it on the Ghost Medicine website or on our Facebook if I can... and, of course, we are sending a copy to Feiwel and Friends so they can laugh at me, too.

And, when it is finished, I want to tell a little more about the young filmmakers who came out to make the video and the ambitious project they are working on this fall.

Last night, I had my second signing AND a reading at the Barnes and Noble in Palmdale, California. We had a great crowd there,and it was especially fun for me to read some of my favorite parts from Ghost Medicine, and watch the reaction from the audience. The day before, the local paper ran a huge story about me and my book, focusing on my commitment to expand reading and literacy among high school-aged boys. So, the very best part of the evening was getting the chance to meet with parents of young readers and all the terrific kids who came in and asked me to sign copies of books for them. What awesome youngsters... in a book store... who love to read. It can't ever get better than that.

Yeah... this is day 20 of Blogging Every Day For A Month.

No breaks. Now I've got to get to work on some other stuff that's got a Tuesday deadline on it.
BEDFAM 20
--A.S.
Posted by Andrew Smith at 11:44 AM