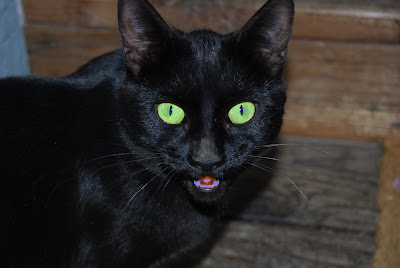 I bet you thought I was going to talk about not being able to write. What a bunch of crap.

Writer's Block is the Bigfoot of literacy. It does not exist. Sure, I've heard plenty of people complain that they've got it. I've even had people write me letters about how they have it. Think about that... how the hell can you write a letter complaining that you can't write about something?

Okay. Finished with my rant.

I am not an animal person, but here's an inventory of the things that live with me:
So, with a list like that, you'd think I was some kind of animal lover (especially because I live in a one-bedroom efficiency), but I am not. And all of those things have names, too (well... except for the stupid chickens. Chickens have to earn names... like my fabled, no-longer-living Buff Orpington "Lucky," who ended up not living up to her name), but I don't know any of their names... except for the dogs and horses.
And I don't care to know their names, either.
A while ago, when I came back from a run in the hills, that black cat up there was out in the side lot fighting with a rattlesnake. This presented me with a kind of moral dilemma: 1) the cat belongs to my little girl, 2) I wouldn't care if the population of cats declined by one, but 3) I supposed I had to be the good Daddy and try to save my daughter's kitty.
So... I go and try to snatch the cat up, and, of course, the rattlesnake takes a bite at me, missing my forearm by about two inches. Yeah... even the chickens would agree I am pretty freakin' stupid.
I returned the cat, whose name I don't care to know, back to the care of my daughter and killed the snake with a kayak paddle.
Ahhh, nature!
BEDFAM 7
It's nice to say goodbye to rattlesnakes and the month of August. Ghost Medicine will be in the stores in two days.
-- A.S.
Posted by Andrew Smith at 9:25 AM