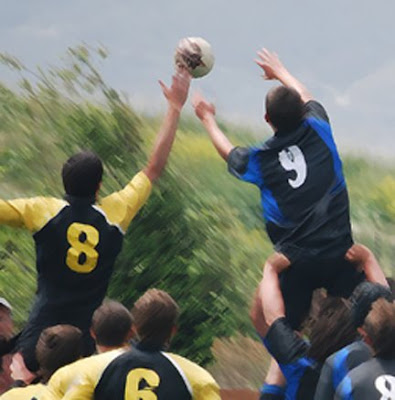 So... about this Shrine of Protection... here are some of the things I've got in it: A statue of crawling Ganesha, a purple ninja, a Hawaiian tiki, a posable Elvis, a "glide action" Jesus Christ action figure with Kung Fu leprosy-curing grip (I am soooo not kidding), of course, the hammer murderer elf (described yesterday), a Mayan sacrificial Chac Mool with some of Bryce Heventhal's actual blood on it, a pack of cigarettes from President Reagan, and a rock shaped like a heart that the rugby team I coach carried down from the hills after I sent them on a long run. They seem to always bring me back ridiculous stuff from their runs.

All of these things will have pictures posted in the coming string of blogs. So far, the shrine has worked. And, like I said, I am in a room that kills people, so I need all the help I can get.
6 days until Ghost Medicine is in the stores.  But nothing's really been happening. I was interviewed by a newspaper the other day, and the reporter asked another very frequently-asked question: What was the hardest part of the path to getting your book published?
Most people seem to think that writing a book is difficult. It's not. It surprised the reporter when I said that, but maybe I'm crazy or something. Probably. To me, the hardest part was all the waiting around between certain steps... but the writing and editing parts were the best, and purely enjoyable. I know I've said that I hate writing before... and it's true. But I don't hate the words part of it, I only hate how it makes me crazy. Or something.
I put a picture of rugby on here today because I am really looking forward to playing again. It is definitely a crazy sport, but, by far, the best sport in the world. Rugby is a perfect game because every player on the team has to do everything: offense and defense, run, catch, pass, kick, score, tackle, and bleed. And players can't come out of the game, either, so they have to be in terrific shape. Or insane. Or both. It's one of the many reasons why the sport is superior to stale gridiron football: you just don't have these specialist players who come out on the field and play maybe a total of 45 seconds elapsed time in an entire game... it's just fifteen positions who are expected to last the entire non-stop duration of play.
BEDFAM (blogging every day for a month)
-- A.S.