things from my books (4) 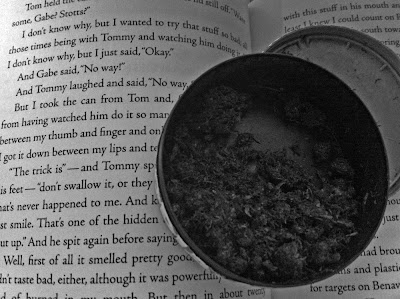 Please don't let me be misunderstood.

This is tobacco. Some kids call it chew, or dip. The boys in Ghost Medicine like it, too -- this particular brand, which shall be nameless. Some people got a little ticked-off with me about teenage boys using tobacco and drinking alcohol in my first two books. I guess teenagers don't really ever do that kind of stuff in the real world.

One of the kids in In the Path of Falling Objects even smokes pot, but I don't have any joints in my house to take a picture of. I know. What a loser. There are actually writers who don't have weed.

But I don't use tobacco, either. I used to like a good cigar now and then, but haven't had one in years. And when I was a kid, like the boys in Ghost Medicine, I did chew tobacco, but I don't do that any more, either, even though I do have this ancient can of it sitting here from way back when I wrote the book.

And here's a story about tobacco and the book: I was very fortunate to be invited to a meeting of this super-cool book club (called Book 'em Danno) after Ghost Medicine came out. All the members had read the book, and they really go all-out on their meetings: special food, the house was made up like a ranch with all kinds of horse-stuff, and they also had a special display of fresh cans of chewing tobacco, which I very politely declined to test.

But having been a tobacco addict in my youth gave me the ability, I think, to write about it in the book. The funny thing was, however, that writing about it did kind of trigger those old nicotine-soaked receptors in my brain and made me want to do it again. But I don't do it. But don't misunderstand me, it's not like I would completely turn it down under the right circumstances and just the right setting, either.
Posted by Andrew Smith at 6:39 AM