things from my books (1) 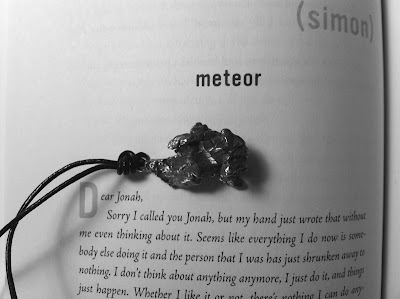 I'm pretty sure that most novelists do this: that we have "things" from our books that become part of the story. I know nonfiction writers do, but they kind of have to, unless you're writing a book about The Wonderful World of Maggots or something.

I'm just guessing that someone has written a book about maggots, too.

So, anyway, I thought I'd run a few posts with pictures of things that I have that pop up in my books (published and forthcoming -- ooh!), and, yes, I do have "stuff" from all of them, even the ultra-disturbing The Marbury Lens.

So to start things off, here is a picture of a meteorite I have. It's a little smaller than the one Simon finds in my last book, In the Path of Falling Objects, but, like that one, it is an iron meteorite -- my favorite kind. These meteorites are usually melted, burned-up bits from the center of asteroids, and they're generally thought to take over a billion years or so on their journey to the earth.

So, if you didn't know, when In the Path of Falling Objects is honored next fall with an award from the Southern California Children's Literature Council, I'll be wearing this guy around my neck.
Posted by Andrew Smith at 7:06 AM