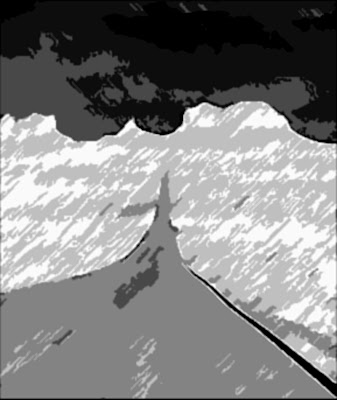 I'm just staying home. Writing all day today. Getting stuff ready for this weekend at the LA Times Festival of Books at UCLA.

But Jack has taken over today, so I apologize in advance if this is a bit edgy.

You know those silicon wrist bracelet thingies? A friend of mine works for author Chris Crutcher, and they recently had some really cool ones made, but one thing: the bracelets have the word @#$% on them, as opposed to the word "fuck."

I'm going to assume that when you see the word @#$%, that you generally read it as "fuck." Right? Or, maybe "shit," depending on the context, but on Crutcher's bracelet, I think the context demands the use of the form "fuck." Because, if it was "hell," you'd just go ahead and write it out.

This is all rather paradoxical, in so many ways, because Crutcher has been the target of so many censorship campaigns, especially at school libraries, resulting from complaints over some of the words he uses in his books.

And so I thought, Wow, that's weird, because obviously the Crutcher people think it's okay to censor a silicon wrist bracelet by using the word @#$%, instead of "fuck." [Memories of Susan Patron: self-censorship is the most insidious form of the practice]

You know, as I said to her, our recession is NEVER going to get better as long as whores get picky about morals.

That pisses me off. I bet I could find some whoring SWB manufacturer who wouldn't think twice about using the word "fuck" on their product.

But, if they put "fuck" on the bracelet, then kids could get in trouble for wearing them at school.

Oh. I get it. That's why books that say "fuck" should be taken out of school libraries.

Kelly told me a story about an eleventh-grade boy who was told to remove his Chris Crutcher bracelet that had the word @#$% on it, or face suspension. Mind you, it wasn't the word "fuck" on his fucking bracelet, it was actually the word @#$%

This is why Jack hates schools and teachers.