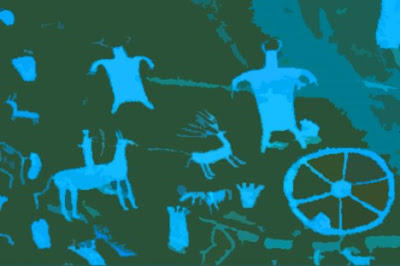 Well, I have blogged every day for the entire month of September, and here I am at a most fitting end.

It works out for a number of reasons. Coincidentally enough, today I just finished the final editorial revisions on in the path of falling objects (Fall 2009), and sent it off to my editor in New York.

And, since the whole original premise for blogging every day for a month was to keep some running blah-fest about what it's like to have your debut novel come out (in case you forgot, Ghost Medicine was released September 2), I thought I'd say a few words about the work involved with actually being published.

Step 1: You write a book that someone other than you, your family, or people who owe you money thinks is good.

The next part is the editing. Many writers I know dislike the editing portion of the journey, but it's one of my favorite parts. Then again, I've only worked with one editor, but it's been a blast for both of my books. I remember that when I gave her a manuscript of in the path of falling objects that she was thrilled and said the book was scary and tense.

I like that. I mean, after all, that was what I was aiming for.

But, through the editing process, she made it into an adrenaline-jolting-stuck-on-top-of-the-world's-biggest-ferris-wheel-during-a-major-earthquake ride. Now that's pure talent... to be able to get to what's really at the heart of a story by just making a few painless little slices here and there (and her editing suggestions have always been very minimal).

Have you ever read a book that you thought was a good story, but you said to yourself... wow, that guy could really use a good editor ? And then, other times, you'll read a book and everything is so seamless and smooth. Chances are, the latter case is when there's a talented editor on board. But they become invisible.


Okay. So that brings an end to the month of September, and the final installment of Blogging Every Day For A Month at bedfam 37, but don't think I'm through yet. As I've warned, I have something special coming up for the month of October, and that begins tomorrow.