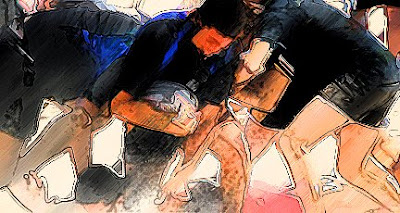 Okay. Back to the business.

I'll admit that my observations are anecdotal, but that doesn't detract from their weight. After all, I've spent decades in the very environments I am criticizing.

Now, I've taken a couple shots at how I see high school football in California as being destructive to our boys, so it's only fair that I continue on with how we damage their chances in the classroom as well.

In reading and writing, girls outperformed boys by "significant amounts" in all industrialized countries.

... That's data presented from a study by the Organisation for Economic Co-operation and Development, 2003, cited in Michael Gurian's The Minds of Boys. It's a terrific book, and I highly recommend it for any teacher, and, especially, any parent of sons... because we're losing our boys in school, and we need to get them back.

For as much as has been debated about the questionable effectiveness of No Child Left Behind, the results of NCLB have actually had a more profoundly negative effect on boys. Although NCLB data is routinely NOT desegregated by genders, we know that today, boys in grades 4 - 8 are typically 2 - 3 years behind girls when it comes to reading level.

New mantra: non-readers. That scares the hell out of me, and not because I'm a writer.

It didn't used to be like this, folks. We're killing boys' chances.

I guess, in California, we're like a bunch of drunks waking up in a fog, in some gutter, asking ourselves "How the hell did we get here?"

I have some ideas on our roadmap that got us into this wasteland, and, as long as I'm going to gripe, I better give a couple of suggestions for ways out, too. And those posts are coming up...

As for today, the 30th consecutive day of bedfam (blogging every day for a month), I had to slam this post up at 3:00 AM because I knew it was going to be a busy day and I wouldn't get a chance to later.