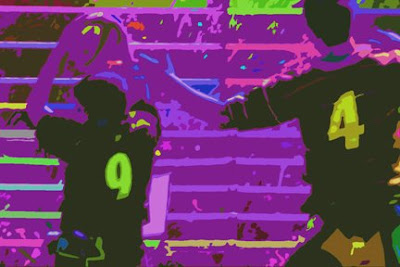 Okay, So, I am on day 11 of Blogging Every Day for a Month (bedfam 11). Ghost Medicine has been out for two days, and people who pre-ordered it on Amazon or Barnes and Noble received it on its release day. It's a little slower getting into the stores, though, but it's getting there.

I will be signing at Barnes and Noble in Valencia, California, this Saturday at 2 PM. I called them today to make sure everything was okay, and they were like, "Who the hell are you?" No... just kidding. There was a bit of a mix-up getting the books in, though, but one of their managers (who happened to be blessed with the first name Andrew) took care of everything, so the event should come off without a hitch.

I hope everyone who goes can get a copy, though, so I'd suggest coming early rather than later.

Then, I'll be on the air doing a radio interview on Thursday afternoon. Sorry... I don't know the station or the show. I'm kind of a dork about things like that, and I don't even watch TV or listen to the radio. Well... sometimes I listen to the radio on the computer, but those are satellite channels, so I don't know what they are, either.

The day after that, I'll be signing at the Barnes and Noble in Palmdale (Friday, Sept. 12 at 7 PM), which is about a half hour's drive from Valencia, so if you are in desperate need of a signed copy of Ghost Medicine, you can head north.

I know. The blog is kind of boring today. It's really hot and I'm trying to do anything so I won't have to go outside and feed the horses yet.
BEDFAM 11
-- A.S.