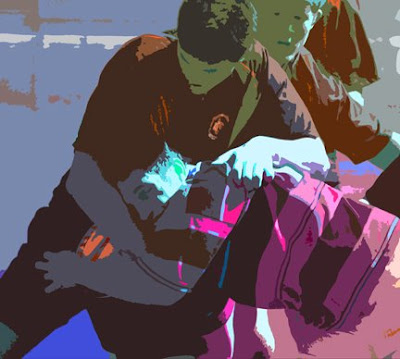 Everyone who knows me in person knows that I do not cuss.

The biggest reason why I don't cuss is that it sounds so unconvincing coming from me. I'm not good at it. Some people are, but not me.

One of the most incredible things to me is how much teenagers cuss today. It's mostly boys, but there are some girls out there who are pretty adept at it, too.

I spend a lot of time every day with teenagers, so I know. I am not making this shit up.

Ooops. Just kidding. I don't really cuss. Well, not with my mouth, at least. And cussing on paper doesn't really count in the long run, does it?

Most teenagers today use the f-bomb as though it is an alternative form of a comma. It is the punctuation mark of young people, and some people sound cool when they say it. But not me.

I bring this shit up because there are no cuss-words in Ghost Medicine. Unless, I guess, if you think "balls" is a cuss-word. I don't. I know it can kind of seem unreal to have a book about teenagers who don't cuss (except the "balls" thing), but Ghost Medicine is a kind of fable in some ways... so I think the dialogue is comfortably realistic.

Oh well. just my thoughts on the evolution of spoken language.

By the way, the no-cussing-in-my-books thing is not like the Smith brand. Lots of writers have written stories and avoided the use of profanity. I guarantee you, though, that I do have stuff where there is no attempt to hold back. But then again, I don't consider cussing with a keyboard to be real-life cussing.
This is the tenth consecutive day I've been blogging every day for a month -- BEDFAM 10
-- A.S.