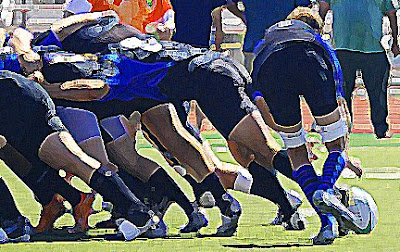 This is going to be the year without football for me. Well... American gridiron football, that is.

I used to love watching football. It was something I'd do all day long, Saturdays and Sundays, with my dad when I was a kid. He used to take me and my brothers to watch the L.A. Rams play in the Coliseum.

But I'm conducting an experiment: I'm not going to watch it this year. Not one second. Not even by accident.

I'm just going to leave it at that, and clarify my reasons in one or more future posts. No sense getting people all worked up this early in the season. I know the words I've written above come about as close to sacrilege in some people's minds as you can get, and I need everyone to think as clearly and rationally as they can between now and November, so I'll ease into my explanation slowly and as painlessly as possible.

I am blogging every day for a month (bedfam), and today is day thirteen. I slept in very late for me: I got out of bed at 6:00 a.m. Today is going to be my first post-release signing of Ghost Medicine at Barnes and Noble in Valencia, CA. I've signed hundreds of galley copies of the book, but this will be the first time my signature goes onto a hardback copy. Should be fun.

So, I am getting the blogging over with early so I'll have time to do the usual Saturday routine: go out with the horses, run five miles through the hills, get my scattered crap together for the trip down the mountain. I doubt I'll be able to post anything later today, after the event, because there are too many bars and friends in the Valencia area, but I will try.

I wanted to end up by saying a huge thanks to author Bill Konigsberg, who left a status update on Facebook last night that said: "Bill Konigsberg implores his friends to read Andrew Smith's "Ghost Medicine." It's really, really good!"

I have so much respect for Bill, and his words really mean a lot to me. I also know the overwhelming blah-ness he is feeling right about now as he toils through the editing of his next novel, just thirteen days away from the release of his debut Out of the Pocket. Been there. Done that. Notice the theme of thirteen running through this blog.

In Italy, where I spent much of my youth growing up, the number thirteen is considered to be very lucky. I remember my aunt giving me a silver number thirteen on one of my birthdays when I was in Trieste. I think it was on my eighteenth. I'm going to dig that thirteen out... I know it's around here somewhere.

And, by the way, I have already pre-ordered my copy of Out of the Pocket. I know, Bill, it doesn't help first-day sales numbers, but, heck, that one-click purchasing on Amazon is so freakin easy.