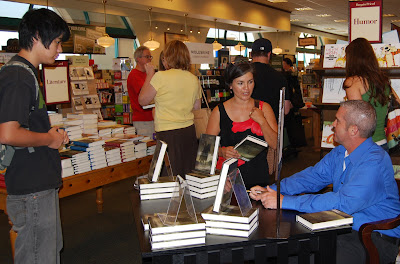 We wiped out all the books at Barnes and Noble yesterday in about 30 minutes. It was awesome.

In fact, I met a couple of people who'd come to get a copy of Ghost Medicine who really affected me in a profound way. I stuck around for a while after all the books had been signed and sold because there were plenty of people who'd come in for a copy after the shelves were picked clean. The last person I met was a boy, about fifteen years old, who came in with his mother. This kid reads about 2,000 pages per week. He loves books, and wants to be a writer, but he wasn't able to get a copy of Ghost Medicine.

Don't worry. We're making sure he gets a signed copy.

As I explained to his mom, that kid is the entire reason why I wrote the book in the first place.

So... now it's out. People are getting it. I have actually seen Ghost Medicine being checked out in a library. I have seen people I don't know carrying copies of Ghost Medicine in their hand. That's pretty good stuff, but not nearly as good as the connection that was made for that boy who one day would like to write his own book.

This is day fourteen of bedfam (Blogging Every Day For A Month). I didn't think I'd get one out consecutively at the beginning. Blogging can be a real chore. But it looks like I'll make it.

And it's going to be about a hundred degrees today, but I don't care. I'm going to go out and play a little rugby.