Here is another question I get asked just about every time I speak to kids about my books: Did the things in your novel actually happen to you in real life?

The answer is yes.

Although it's not really Winger Tuesday -- I just made that up -- I thought I'd talk a little bit about that second-in-the-queue book of mine today.

Winger is coming out next spring from Simon and Schuster.

Winger is a different kind of Andrew Smith book (what two are similar, anyway?) because it's kind of funny, and it also includes comic book pages, drawings, charts, diagrams, poems, plays, love notes and other stuff.

It's about a kid named Ryan Dean (that's his first name) who attends a school for misfit rich kids, where he plays rugby, which is the greatest sport known to man.

Rugby has been a part of my life for a very long time.

See this picture down here:

That kid raising his hand there on the far left is my son, Trevin, when he was about seven years old and starting off playing on his first rugby team. Kids at that age (in America, at least) play touch, as opposed to tackle rugby, and with only seven kids on a team.

Trevin was pretty tall for a seven-year-old. Um, now that he's seventeen, he's six-foot-five. He goes to UC Berkeley, which I mention because Cal happens to have the best collegiate rugby team in America. Trevin no longer plays, but if he did, he would be a hell of a lock, which is a second row forward. In Winger, one of the characters -- a jerk of a kid (who also has a soft spot) -- named Chas plays lock.

Unlike his dad, I don't think Trevin enjoys hitting people.

So I was feeling a little nostalgic last night, thinking about Winger. I coached a terrific high school rugby team for a number of years, but just don't have time for it any longer. I'd really love to do it again, though.

See this kid down here: 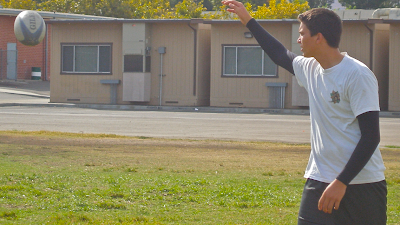 Okay. This kid showed up one day when we were conducting summer practices. His name is Davis, and I'm pretty sure that picture was taken on his first day of practice. He rode his bike down to the field, where about 75 boys were trying out for the team. He was 14 or 15, and had just moved to California, and came up to me and asked if he could play. The kid ended up playing for the US National team over in Europe.

Anyway, so I was feeling nostalgic about rugby last night, because, out of the blue Davis, who lives two states away now, phoned me and asked me to come to his wedding next month.

It's been a long time.

He's read my books, and I told him that my book about rugby would be coming out next spring.

He said, "It's about time, Coach." (I think he will probably call me Coach for the rest of my life).

Anyway, an awful lot of the little stories that happen in Winger actually happened to the kids on my teams over the years. Some of them are kind of embarrassing (and the kids -- now men -- will definitely remember them).

One of those stories -- about when three punks showed up at practice looking to knife one of our players -- also actually happened.

I've been trying to think of something dumber than showing up at a rugby practice with the intention of knifing a rugby player, but can't come up with anything.

I'll leave it at that. You'll have to read the book.

This is when we played a team from Perth, Australia (the Aussies are in green):

This was after the game, after the kids had beaten the living shit out of each other for 80 minutes.

If they look like they really like each other, they do. It's part of the game. Five minutes before this photo, they were trying to kill each other.

I can still look at that photo and tell you just about every nickname the kids on our team had for each other. Nicknames are permanent things in rugby.

The photo below is a close-in shot from a scrum. The kid on the right was one of the best loosehead props (sometimes he played hooker if we had our really big props in the game) I ever coached.

His nickname was Chicago. I think people still call him that. 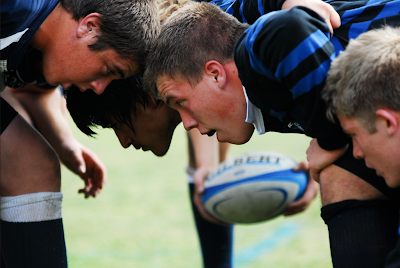