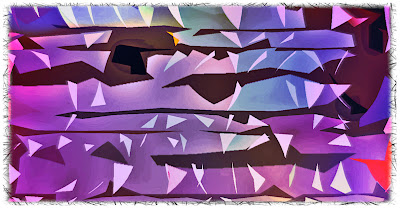 1. Yesterday morning, I was in kind of a rush to get out of the house. So I got up early and did a quick five-mile run. When I came back, I'd received an email from David Gale, my editor at Simon & Schuster. He sent me the cover for Winger, which is coming out next spring.

I laughed out loud. It was a good laugh-out-loud. The cover is actually very funny. In fact, I told him it was ballsy.

This is not a tease, but, of course I can't show it to anyone yet. But I have to make this list of why the cover is so great:

i. It is not "stock." They actually used a model, put a lot of effort and creativity into some very complex photo shoots, almost to the extent that it was nearly a film set operation.

ii. I have NEVER seen a cover like this before. Face it, you know how authors tend to squee and fizzle over cover reveals (I had a very funny chat with A.S. King about this just last night), when, ultimately the covers they squee and fizzle about are usually reiterations of THE SAME STUFF (girls with big dresses in dark settings, boys looking down or angled away so you can't see their faces, romantically juxtaposed Converse sneakers, blah blah freaking blah...), this cover... well... it has NEVER been done before.

I will admit that can be a bad thing. But I'm all for never-been-done.

iii. You can see every detail of the model's face. He is not looking down at his feet, or looking away, or blurred out. And he is NOT wearing Chucks. Well, you can't see his feet, but, trust me... he isn't. And he's also a perfect representation of Ryan Dean West, the narrator/cartoonist who tells the story of Winger. In fact, when readers get to the part of the book that coincides with the cover, I am certain they will flip back and forth from text to image and look to see how freaking perfectly the cover coincides with the story.

2. Regarding signs: The other day, I wrote something about quantum reality and postulated that if a tree fell in a forest and nobody saw it, then the forest probably didn't exist in the first place.

Not too long before that posting, I took a photo of my backyard in the morning. Here is one of the photos I took, but did not post: 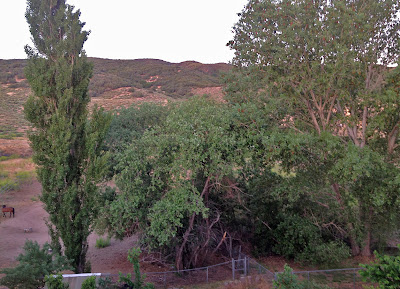 Okay: Notice my horse at lower left, the roof of my greenhouse at the bottom, and a very, very tall tree rising out of the photo along the right border?

Here is the same backyard this morning: 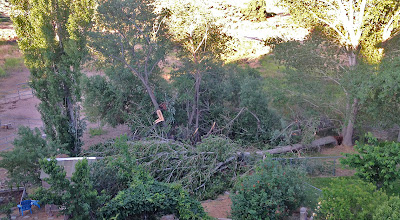 The gigantic tree on the right fell down, crushing my fence and horse corral and barely missing the greenhouse.

Nobody saw it fall.

This is proof the universe is fucking with me. 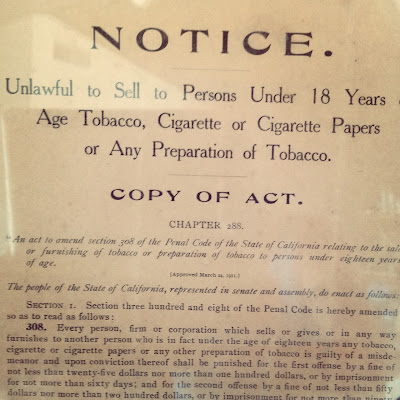 It is a framed poster from March, 1911 of a law put into effect by Frank C. Jordan making it illegal to sell tobacco to minors in the state of California.

I have had that thing in my office forever, and, to be honest, I don't even remember where or when I picked it up.

Maybe nobody saw it happen.