So, yesterday I announced that I had signed on to contribute a story for a forthcoming anthology to be published by Chronicle Books in October 2013.

This means I will have two brand-new books published that same month: the Chronicle anthology, and Grasshopper Jungle, my novel, from Dutton/Penguin.

I'm excited about the anthology for a number of reasons. First, it is an anthology of stories about Jack the Ripper. Naturally, that's my kind of stuff. Also, the work is being edited by my longtime friend Kelly Milner Halls, whom I haven't worked with since we were teenagers.

So far, I also know of two other authors who are confirmed contributors to the anthology: Tanya Lee Stone, and my friend Ellen Hopkins.

So this is all exceedingly cool.

A couple years ago, I took my family over to London, and we actually toured around Whitechapel and some of the locations involved in the Ripper murders. I will share some of the photos I took there from time to time.

Today's photo topic on Instagram is From a Low Angle. I happened to take this photograph of Christ Church Spitalfields (built in the early 1700s) in Whitechapel, London during my visit. The church is just across from the notorious Ten Bells Pub, which is a key location associated with the Ripper killings. 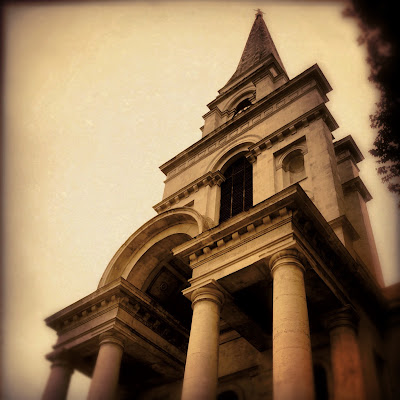